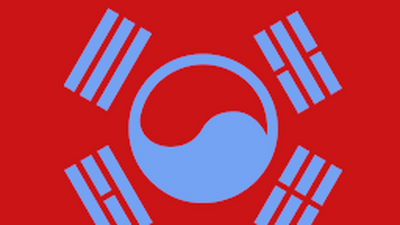 Back to Civilizations The Korean people represent a civilization in Civilization VI: Rise and Fall. They are led by Seondeok, under whom their default colors are red and light blue. The Koreans' civilization ability is Three Kingdoms, which increases the Science yield of Mines and the Food yield... 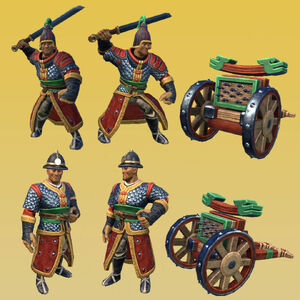 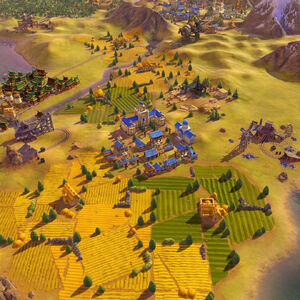 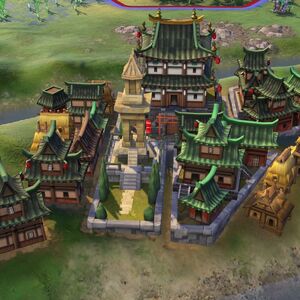 O supreme king Gwanggaeto, the feared armies of Goguryeo stand ready to expand your glorious domain at your command. Immortalize your nation and your people through your conquests, and your descendants will forever remember you in their steles as the Great King.

Goguryeo is a military-focused civilization, especially under Gwanggaeto. Mountains are very beneficial to your empire, and your unique tile improvement helps with defense and the increasing of Loyalty in recently captured cities. Your unique unit, the Gaemamusa, is a speedy fighter and is best for capturing cities after your other units.

Ability: Land of the Sun Crow

Mountains provide +1 Faith. If the City Center is adjacent to a Mountain tile, the Palace provides +1 Housing and +1 Faith and City Centers in other cities provide +2 Faith.

Replaces Knight. Has 5 Movement and a Ranged Attack with 2 Range and 40 Ranged Strength and 45 Combat Strength. If adjacent to a Mountain, no ranged attack penalty against District defenses.

Unlocked with Iron Working. Must be placed adjacent to a Mountain. Provides +2 Production. If adjacent to a district, provides an extra +1 Production. Units within 2 tiles of a Sanseong gain +4 Combat Strength. When at war, Sanseongs provide +2 of any Special Resource per turn needed to make military units you lack(given you have unlocked the technology needed to unlock the resource). When at peace, Sanseongs provide +2 Culture(and +2 Tourism with flight).

Conquered cities with a Holy Site or Sanseong gain +1 Loyalty per turn. Holy Sites provide +1 Great Prophet per turn point while at war. Cities following your Majority Religion suffer no War Weariness if at full loyalty.

Greetings: I am Gwanggaeto, the supreme king of the magnificent nation of Goguryeo. Our nation is an equal to even the grandest of empires! Welcome.

Agenda Approval: You strive for glory, just as me and my armies do. Your accomplishments earn the respect of the Goguryeo people.

Agenda Disapproval: How can Goguryeo stay supreme when you are taking the spaces that we thrive in? We may have to reclaim these lands from you!

Attacked: War with Goguryeo is a foolish course that many have tried and many have failed in. Our mountain fortresses will stand tall as your armies crumble.

Declares War: My cavalry shall overwhelm your troops, and we will allow your people to bask in the shadow of our glory.

Defeated: What has happened? Where did I fail in my reign?

Quote: "Brothers are like arrows. If the older is the arrowhead, the younger is the feather and shaft."

Delegation: Hanbok, our famed traditional clothing, have been sent to your lands as a gift and sample of our culture.

Accepts Delegation: Your gifts were of much interest to our people. We learned a lot from your emissaries, who were given a tour of our fortresses on the mountainside.

Rejects Delegation: Your emissaries will have to wait another day.

Rejects Deal: Perhaps some other time...

Asks for Friendship: Our empires are equals, and with your acceptance, brothers.

Accepts Friendship: This friendship will be withheld with the utmost honor.

Rejects Friendship: Our empire makes its friends with only those who can help us thrive.

Denounce: Your empire is a shameful taint on the world. Someday a greater king than you will make the earth clean again.

Denounced: Your insults will be no match for my cavalry.

Invitation to City: Our traditional heating system, ondol, keeps our houses warm. You can learn how to it works if you accept my invitation.

Invitation to Capital: Gungnae, with its many tombs, is a sight to see. We would love to have you sample it.

Bullseye- Win a game as Goguryeo

Definitely Korean- Defeat China as Goguryeo in a game

Wilting Peonies- Defeat Seondeok as Goguryeo in a game 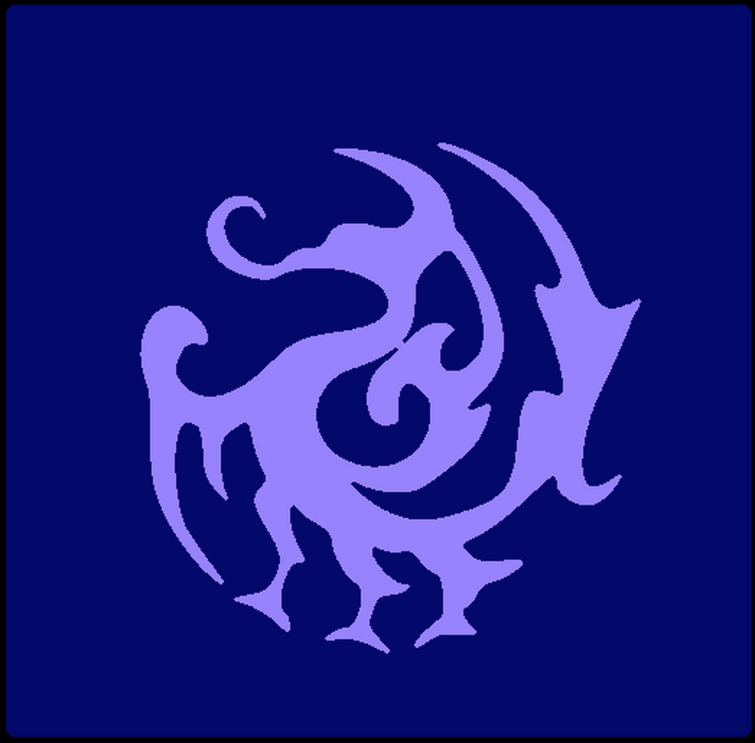 Hagja Wang, he can built buildings that can increase Science and Culture.

Agenda-based approval: You know History than Diplomacy and Confucian law, my friend, but you're doing an good job!

Agenda-based disapproval: One of my advices is that you should be wise next time!

Declares war: By many years! Joseon has not been threatened by an army, but your army is threating Joseon!

Defeated: The legacy of the House of Yi is over, I guess what Dynasty you will build!

Greeting: I'm the King of Joseon! I hope that you feel welcome!

Quote from Civilopedia: Even if you know the way, ask one more time (Korean proverb).

Sends Delegation: We send you some tea and ceramincs.

Accepts Delegation From Player: Joseon thanks you!

Rejects Delegation From Player: We can't accept this

Accepts Player's Declaration of Friendship: We can start our relationship!

Requests Declaration of Friendship: We are searching for an ally!

Denounced by Player: You will be punish!

Denounces Player: You will die in hell!

Invitation to Capital: What wonders does your Capital has?

Invitation to City: Joseon has many wonders! 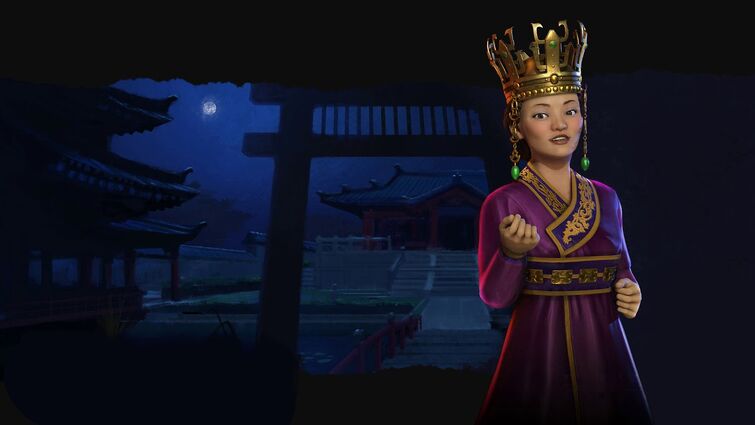 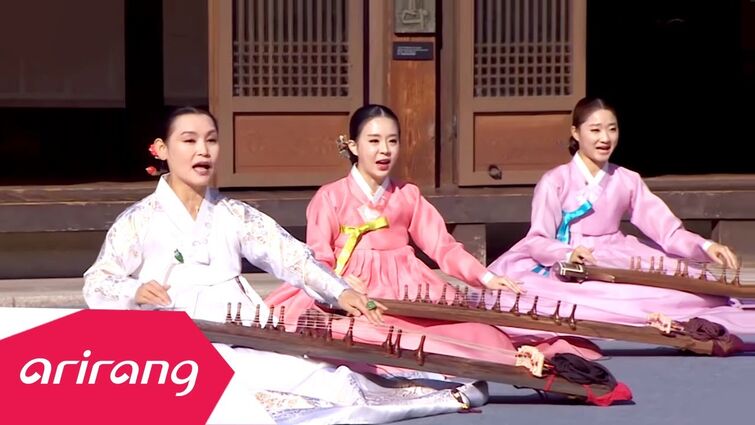 Detailed approach: Under Gwanggaeto, the Hwacha becomes a lethal weapon. With early sources of Great General Points, the Hwacha can mobilize quickly and earn Promotions thanks to his splendid Temples. As always, the Seowon is essential to the Korean enterprise if they intend to win a Science Victory, but with a Temple in every city, a Domination and a Religious victory go hand in hand.

+100% Production towards Temples. Temples produce +2 Science and +1 Great General Point. All units gain +25% experience and start with a free Promotion when trained in a city with a Temple.

Sends Delegation: “Please, accept these gifts from Goguryeo. They will help you on your path to greatness.”

Accepts Delegation From Player: “Very well, then. They may enter my kingdom.”

Rejects Delegation From Player: “We have no need of outsiders spying upon us.”

Accepts Player's Declaration of Friendship: “We only accept friendship with the deserving, and I guess that that includes you.”

Rejects Player's Declaration of Friendship: “You? A friend? I can always do with a laugh like that!”

Requests Declaration of Friendship: “At last, Goguryeo opens its gates to you, like it has done to so many empires over the years. What do you say?”

Denounced by Player: “Excuse me? You muddy the world with these false words? Good luck surviving this.”

Denounces Player: “I cannot suffer in silence while a tyrant destroys the world.”

Invitation to Capital: “Currently, my kingdom is ruled from Gungnae, though that could change. What of your kingdom?”

Invitation to City: “I see you to be near a city of mine. Would you like to visit?”

Accepts Invitation from Player: “I look forward to it.” 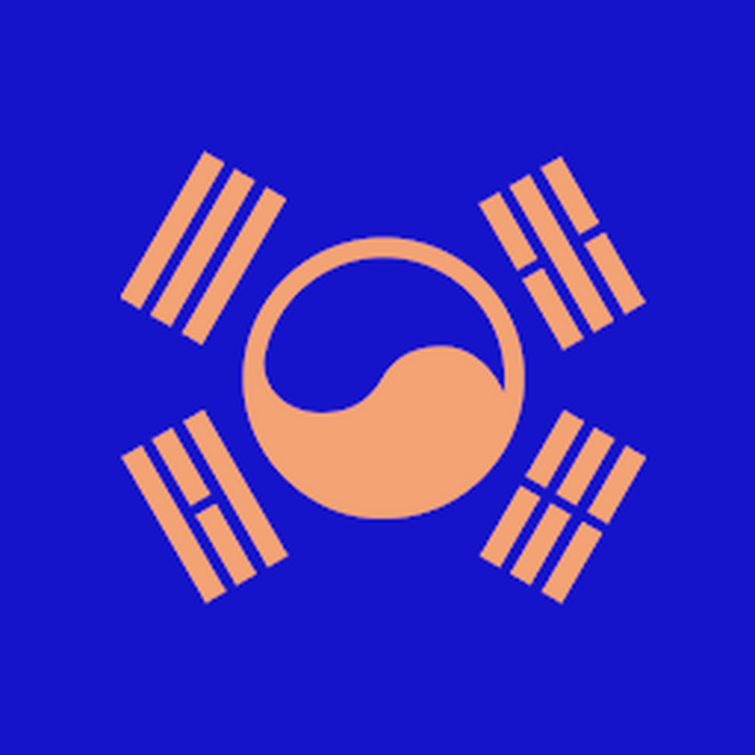 I'm gonna start doing reworks. These reworks will be for civilizations deemed weak, hard to use, strange or just plain need fixing. Today's is gonna be Korea, because they are an absolute scientific juggernaut, but some aspects of them like the Hwacha and Three Kingdoms need fixing.

+25% Great Scientist, Writer and Engineer points. For every 3 technologies you are ahead of the leader behind you, earn +5% Culture and Production.

This adds a more cultural approach to Korea, making it a tad more versatile.

Seowon: Starts with a base yield of 2 Science. This yield increases by 1 when adjacent to River, Mountain or Geothermal Fissure(this will stack, so Seowons will yield 4 science if adjacent to a river and a mountain, for example). Adjacent Mines yield +1 Science and adjacent Farms yield +1 Food.

Hwarang will be replaced with an ability called Hwangnyongsa.

Hwangnyongsa: When you complete a Wonder, earn Science equal to 50% of the Production used to make it. +2% Science and Production in your cities for every Wonder or District in that city.

The Hwacha is replaced by the Hwarang.

Hwarang- The Hwarang can only be built in a city with a Seowon in it, and is unlocked with Horseback Riding. Has a ranged attack with 2 Range and same movement as the Horseman it replaces.

And so that is my rework for Korea! Let me know if you disagree with anything or have any feedback in the comments.