Okay, I did a search and found nothing, so I hope this hasn't already been covered, but is there a way to turn off auto-cycling? Too often I want to do something at a spot, or even worse see an enemy unit I want to address, then I have to spend ages finding it when the auto-cycle finishes. (Or lose track all together if it passes thru my line of sight then out of it).

Civ iv colonization is listed as having no map editing. There is a World Builder on the menu which seems to act as a map editor. It has flaws, but mostly works.

I have UnCiv 3.5.7 on my phone which I got from F-Droid and it's okay up until the point I got Chivalry and went to build knights.

I have a city with horses. The horses tile is inside my tarritory, and it has been improved with a pasture by a worker. From everything I know about Civilization, that resource should be added to my empire and I should be able to make units that require horses now.

I can't make knights. It says I need horses. I thought maybe a road wasn't connected or something, but none of my cities can make knights, even the city with the horses.

It kind of sucks because the barbarians are harassing me big time and have captured several workers and I'm pretty much surrounded by barbarian villages. My babylonian bowmen can protect my cities but can't really take the fight to them. I wish I could build some knights and smash thier villages.

(edited by A Fandom user)

But I lost it somehow :( I still play the game almost every day.

I have been searching everywhere for it online but no joy it was very useful when trying to work out if i irrigated or mines say a gem tile what i get for example.And it was just pretty to look at too

I was wondering if anyone has played this game and encountered the situation in which you try to use Ada Lovelace, Monarchy, and Programming a Build in the same turn? Is it allowable to program a build for double production output, then harvest a resource, then use Ada's ability (take another unblockable city action) to use the double production as a third city action?

However, in my opinion, they either cut the game too much or not so interesting. Advanced Civilization affects only the ancient period of time, the game of 2002 is very cumbersome and old-fashioned, the version of 2016 has, in my opinion, the most disgusting and uninteresting battle system, there is almost no war. Of all this, the 2010 version is the most popular, but it also has drawbacks: very few, no, VERY FEW water tiles, a very small number of technologies, especially modern ones (although there should be more), and some details (for example , the ability to trade with an opponent, even without meeting him on the card).

About the version of 2007 I heard little, and few people played it (at least in my city).

I just thought: can create a new board Civ? Where everything will be, for which we love it: a realistic map, historical events, a vast expanse and choice of development.

The main thing that I would emphasize: historicity, namely, the historicity of the development of nations (for example, in the Middle Ages all will benefit from taking feudalism and building more colonies in the Colonial era), rather than individual events such as the victory over the Invincible Armada in England, Kulikovo battle in Russia or the construction of the Taj Mahal in Agra.

What do you think? Is it worth it? 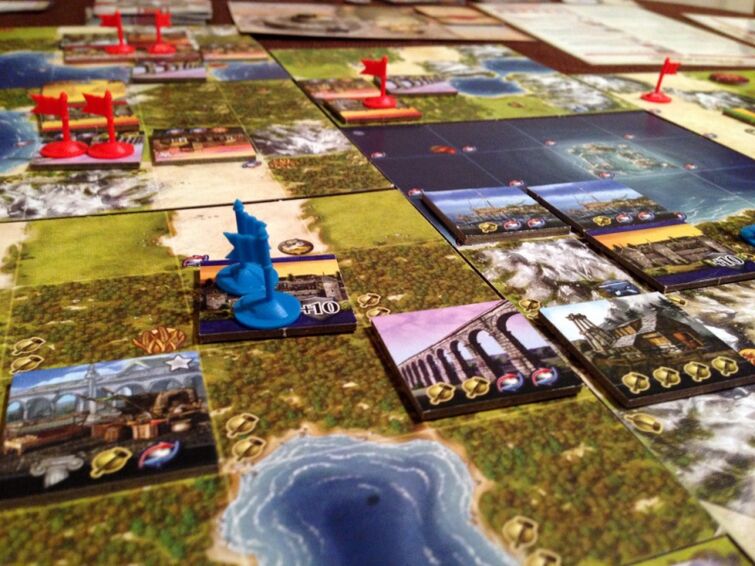 Maybe there is a need for community suggestions on early game strategy. Certain decisions the player has to make, in order to establish an early advantage in the game. Surely, there are many ways to glory, but all of them share some common goals.

You need gold The main focus of your economy should be on acquiring more and more gold. You need gold to wage wars, you need more gold to buy ships, more gold to grow your economy. To get there, you'll need to sell luxuries. The easiest step in the early game, is to import trade goods from Europe. The locals are willing to buy them at very high prices, although no more than 200 pieces per village. Their villages produce needs as turns go by, and the price is also affected by your reputation as a good neighbor. A reputation that can be improved through trading, gifts, fighting common (european) enemies, but above all with regulated and legal trespassing.

(edited by A Fandom user)

What improvements would you like to see in Civilization VII, if and when it does come out?

maybe it's me but how do I right click with a MacBook Pro in this game to move starships?  I've tried holding down in turn the command key, the option key and control key with little success

(edited by A Fandom user)
Guidelines