The leader Elodie (Charismatic) causes crew morale to increase by 10%

Long wealthy, Élodie’s lineage traces back to the nobility and privileged elite of France and Italy a millennia before the Great Mistake. Her family’s prestige and influence was not, however, based on its peerage, but rather on the immense fortune it had amassed over the previous two centuries from its holdings in agriculture, food processing, pharmaceuticals and textiles. Opportunities since the Great Mistake have made it even richer; for instance, from its pharmaceutical operations during the “super-bug” pandemic after the Great Mistake and its farms, orchards and vineyards in Portugal, France, Sicily and Greece which remained relatively untouched by the fallout.

Born in Europe’s foremost fertility and maternity clinic in Braga, Élodie was her parents’ only child. Raised in luxury along the Cote d’Azur and the Costa del Sol, Élodie became a media darling as a teen, although not always portrayed in a flattering light. Reaching maturity, she parlayed that exposure and her experience with the press into a platform for her politics and cultural cachet. Although raised in the Catholic traditions of the New Papacy, Élodie professed to follow no specific religion. She was, however, a staunch monotheist and brought her faith into all her dealings.

Accused by her detractors as an isolationist, and a European elitist, Élodie certainly possessed a famously acerbic tongue and quick wit. A strong believer in the value of the Western cultural tradition, she believed that it was up to the educated European elite to guide the masses for their betterment, ensuring the survival of high culture. The best way to do this on Earth was the independence and sustainability of the new Union. More vital, in Élodie’s view, was to insure that the Franco-Iberian Union plant colonies off-world.

When Franco-Iberia announced its plans to launch a “Seeding,” Élodie used her considerable influence and family connections to get her name on the short list for command. Using her media savvy, she managed to get the mass media’s backing, making her a popular choice among the citizenry of the Union despite her age. Beyond the operational matters (and Élodie had a knack for choosing able lieutenants), she also personally oversaw the construction of the Canon, the definitive collection of Western art, letters, and music, which became the template for inclusion in the cultural banks of other Seeding projects. Hence, when the colony ship set out, it not only carried people and technology from Franco-Iberia, but some of old Europe’s great artworks and schematics for duplicating many of Europe’s great architectural wonders. Élodie’s new colony was not only to prosper, but look good doing so.

A second chance is not something which you are granted; it must be created. As our world collapsed, we had the wisdom to strike out into space. Now, we search the Heavens for a fresh start – a new world upon which to plant the seed of our people. This is our second chance and we will make the most of it.

As we fly through the vastness of space, I am filled with courage. In these people, I see the seed of greatness. Others may hope only to survive in this alien land, but not us. Ours will be the greatest colony to grace those shores – A grand, new Eden, worthy of Franco-Iberia.

Oh, if I could see this new planet through the eyes of Rembrandt! If only he could accompany me now, by some divine miracle, to witness the alien world through my window. What wondrous paintings he would create from this new muse.

We have arrived. The new Eden lies below, ready to receive our wisdom and creativity. We have brought all that is good from old Earth and with it, shall make this world better. The glorious culture of Franco-Iberia will take root in this alien land and bloom unto its full majesty.

It was John Calvin who said, “There is not one blade of grass, there is no color in this world that is not intended to make us rejoice.” Below us waits a foreign world. No matter how alien it may appear, I know it will bear creation’s majesty. Our own miraculous Earth was destroyed by those too selfish to look outward. It is my great hope that we will appreciate the inventiveness of our new world more than we did the last.

From the Preface of the Canon, first printing, Franco-Iberian Department of Culture

The great and unifying theme which underlies all of Western arts and letters has the question: What does it mean to be human? The greatest minds of each age, over millennia, have brought particular clarity and insight into this question by refracting the universal truths of humanity through the prism of the events of their day. Taken as a whole, this Canon represents deep wisdom and insight, and thus is inherently good in its own right. What distinguishes human from animal is this ability to build a cultural legacy and transmit this to future generations.

In a real sense, however, this wonderful collection of thought is limited by one fact: All of these writers and artists, poets and painters were inhabitants of the same planet. Of the common threads of philosophy that run through the Canon, are they truly universal, and indicative of the human condition? Or are they conditional on this one world? We believe that some of them must be universal. Love, for instance, should be agnostic of the color of the sky. But what of the basic nature of humanity? Do we become base and feral when placed on a different world? Are we ennobled by distance? If alienated from our place of birth, do we persist in wisdom, or do we repeat the many mistakes of history? Perhaps we shall find that the truths of the Canon hold independent of any world, and thus we may learn that human beings have long since distilled the essence of meaning in ages long past.

This question must be addressed, not for scientific reasons nor for political reasons, but because our entire cultural treasury demands that we ask and answer. This is the great contribution that this age can make to all previous ages, and to fail to answer this question would be to shirk a great moral responsibility.

It may be that our failure to live up to our moral obligations over the past three centuries have irrevocably harmed this world. A failure of political morality legitimated atrocity as tools of the state. A failure of ecological morality compounded the suffering and exacerbated the ill effects of these political failures. It has been shown empirically that we stand at a threshold where soon we will no longer possess the means to sustain neither our accustomed standard of living, nor a program of viable extrasolar colonization. Thus we must not fail this final moral test for humanity, or we shall have entirely squandered our potential as a species, and wasted the inheritance we have received from previous generations.

Our common humanity is revealed rarely, often only in the face of the most dire exigencies. And so while we are in a perilous state of affairs in this age (rarely has humanity as a whole stood at such crisis), so also do we find one of those rare historical moments whereby we may set aside that which is petty and banal and find great strength, meaning, and purpose within these times. Thus renewed morally and rededicated to the good of all, we may continue forward both physically and culturally.

If you have embraced the wisdom within this Canon and the traditions that spring from it, you may in fairness ask with appropriate skepticism whether it is truly representative of all great philosophies. I assure you it is not. I have left works out and make no apology for such. It is the prerogative of the curator to make these decisions. If you, in future generations, wonder if the libraries and databases of Earth hold treasures not listed here, I assure you that from the perspective of one who has spent her life in the service of culture: They do not.

I do not subscribe to the notion that all ideas are worthy of preservation. Some are reprehensible, and through diligent study you may detect the shadow of these ideas before they reform within the zeitgeist, and choose a different path for yourself before they infect minds again. Some are banal, and have been culled because the ideas within them, although perhaps worthy, were expressed with considerable crudity. Some are preserved as historical curiosities, fashionable nonsense which you may examine and mock for their shortcomings. I have labelled these latter ones as such, lest there be confusion on the point. You will no doubt replicate much of old Earth’s folly in your own time; I will not enshrine this folly lest it be mistaken for wisdom.

While I readily accept the blame and condemnation of possible futures, I will also claim a measure of credit for this work. This is the culmination of years spent in service to the muses, to the liberal education, to the cultural history of civilizations, and to ancient wisdom which has stood the test of time.

What the Canon cannot do is set the actions of you people of the future on many worlds. But I feel strongly, on the weight of history and the actions of the wise, that those who study it and reflect thoughtfully on its contents will be able to draw upon the best of humanity, distilled over many ages. 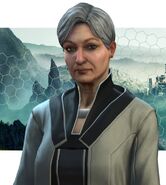