Culture from each adjacent Wonder
+1

Culture from each adjacent District, +1 additional

Culture if adjacent to the City Center

Culture from each adjacent Entertainment Complex and Water Park

Must be built on a Hill

Wikipedia has a page called:
Acropolis

The Acropolis is a unique district of the Greek civilization in Civilization VI. It replaces the Theater Square and can only be built on Hills.

The following buildings can be constructed in an Acropolis:

The Acropolis is a clear frontrunner for the title of "best piece of unique infrastructure in the game." This district is simple enough for even new players to handle properly, yet can grant a huge amount of

Culture very early on, allowing Greece under either leader to reliably unlock civics at an unmatched speed.

In terms of gaining a high adjacency bonus, the Acropolis is the polar opposite of the standard Theater Square. The Acropolis gains +1

Culture in total) if next to a City Center. Note that Acropolises must be built on Hills, which isn't that restrictive, but is something you should bear in mind when choosing places to settle. Since it isn't possible for an Acropolis to be adjacent to more than one City Center, it is also worth turning your attention to the Government Plaza and Entertainment Complex. The Acropolis earns 2

Culture when next to the Government Plaza and a whopping 3

Culture when next to an Entertainment Complex. Similar to how you position the Hansa cluster in the middle of 2 or 3 cities, or how you build a

District cluster as Japan, you can try to find a location that is surrounded by Hills for the Government Plaza or an Entertainment Complex, and then try to put as many Acropolises as possible around it. This is theoretically possible with a Water Park as well, but the Entertainment Complex is unlocked much sooner and the Water Park's placement requirements make this extremely troublesome.

Two wonders that you should consider building early on as Greece are the Oracle and Colosseum. Building the Oracle boosts Drama and Poetry, the civic that unlocks the Acropolis, and in conjunction with Pingala and his Grants title, it will give large bonuses to all three kinds of

Great People the district can generate. Since you want to build an early Entertainment Complex and surround it with many Acropolises and cities, it is convenient to try to build the Colosseum.

In addition to the

Envoy when completed. This is particularly useful for Pericles, whose leader ability functions best when he becomes the Suzerain of many city-states. Also, each Suzerainty grants 1

Diplomatic Favor per turn, which allows Greece to be competitive for a Diplomatic Victory.

In ancient Greece, acropolis meant, quite literally, "upper city." And in Athens, Corinth, Argos, Thebes, and elsewhere, that's exactly what it was – a portion of the town built upon an elevated area, often a hill with steep slopes, that was eminently defensible. Should the outer walls fall to invaders, a final stand could be made in the acropolis. In time, in many places, the old acropolis became the nucleus of a sprawling new city. During the Archaic Period in Greece, as the cities grew and the threat of barbarians lessened, these old upper districts underwent urban renewal, with temples, theaters, forums, palaces, government buildings and the like replacing the humble houses, markets, barracks and squares that once occupied the summit. 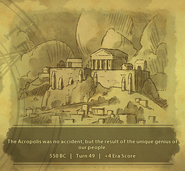 Historic Moment for building the Acropolis
Community content is available under CC-BY-SA unless otherwise noted.
Advertisement