Civilization: Beyond Earth introduces a new means of specializing your civilization after the game start - Affinities. Strongly reminiscent of the philosophical viewpoints which shaped the factions in Sid Meier's Alpha Centauri, the affinities are answers to the question "We are beyond the limits of Earth-bound Humanity; where do we go from here?" Supremacy's answer is prosthetics, virtual reality, and uploading. Purity's answer is to stay unchanged and facilitate solving Terran problems. Harmony chooses to self-modify biologically, eventually merging with the native life-forms in a hive mind. In SMAC, these correspond to the University of Planet, Lord's Believers, and Gaia's Stepdaughters factions, respectively; the other four factions are not represented. (The Rising Tide expansion adds hybrid affinities, but none of these correspond to SMAC factions.)

Affinities are much like Ideologies in Civilization V: Brave New World in terms of direct game effects, the way you develop them is substantially different. Ideologies were primarily set by the social development of a civilization and were therefore chosen rather than developing as an emergent consequence of other choices. Affinities are increased by technological advancement and side effects of quests, and making efficient use of the strategic resources which are present near your capital requires advancing in particular affinities; Floatstone needs Purity to use effectively, Xenomass needs Harmony, and Firaxite needs Supremacy. Consequently, affinities develop primarily as a result of other choices whose principal benefits are unrelated.

There are also unlock systems which allow perks and upgrades for many types of building, unit, satellites, etc., based on your level in the affinities. This means that affinities have far-reaching implications shaping what strategies are viable for your civilization.

How do you develop Affinities?[]

There are two main ways to develop affinities:

With sufficient affinity points, players graduate to the next level of the given affinity, unlocking benefits. Note that there is no limit in how you advance Affinities - you can choose to concentrate on a single Affinity, or you may want to develop all three of them, it's up to you. However, the Affinity in which you have the most levels (starting at level 4) will always be considered the 'Dominant' one, and other players will react to it.

The AI players tend to choose an affinity that's not chosen by their neighboring civilizations, but it is also clear that specific sponsors have no predetermined affinity preference.

The advancement in Affinity levels brings your colony many benefits:

Finally, progressing enough in each Affinity (past level 13) opens the path to Victory. The Harmony affinity allows you to achieve a Transcendence victory, the Purity affinity - a Promised Land victory, and the Supremacy - an Emancipation victory. Note that achieving the minimum level in the selected Affinity doesn't automatically grant you the victory - there are some more things to be done afterwards.

Also note that there are possible Victory types (the Contact and Domination victories) which don't require progression in any specific Affinity. Go for these victories if you don't feel particularly strong for any of the affinities, and want to keep a broad approach to developing your colony.

Harmony is one of the three affinities in Civilization: Beyond Earth. Instead of changing an alien world to suit them, the followers of this Affinity alter their own DNA with various traits from the local wildlife in order to be able to survive there. Ultimately, most Harmony purists seek to build a biotechnological construct which will, through the use of specialized nanites, eventually link all organisms with brains on the planet into one massive compound intelligence on par with a god. They are able to have alien creatures as units and specialize in rapid movement and the use of the planet's terrain and natural features in their military affairs. Their chosen resource specialization is

Purity is one of the three affinities in Civilization: Beyond Earth. The Purity affinity desires to preserve and improve upon mankind as they are and seeks to convert the planet into a state similar to Old Earth before the Great Mistake, regardless of what happens to the local wildlife. The ultimate goal of a Purity purist is to eventually resettle much of the Earth's diaspora onto the planet and save that world from overpopulation and resource depletion. Purity military forces concentrate mostly on mechanical exoskeletons, energy weapons, and amphibious attacks, thanks to their armadas of LEV vehicles. Their chosen resource specialization is

With the arrival of the Rising Tide expansion pack, it is now possible to blend two affinities together to gain access to an entirely new set of units that contain a few of the basic strengths of both factions as well as some new traits of their own.

Obsessed with purity of form beyond even the most extreme Purity purists, Harmonal Purists use extremely complex genetic technology in order to not merely improve upon man, but to accelerate his evolution into something stronger, more intelligent, and far more capable than his current existence. Harmonal Purist units usually appear very anthropomorphic and "godlike" and are painted in gilded coloring across their entire bodies save for the tell-tale Purist stripe of red.

Simply put, Puritanical Supremacists are dedicated to the complete and total separation of man from machine and the perfection of both to the highest degree, constructing enormous robotic war machines with A.I.s of animal-level intelligence piloted by men clad in advanced (but not powered) armor. Their unit colors are usually pure white with bluish lighting effects.

Willing to sacrifice everything in order to ensure the survival of humankind, Harmonal Supremacists replace so much of their bodies with cybernetic grafts and vat-grown alien tissue that it is almost impossible to tell where the flesh ends, the machine begins, and if the unit was human at all to begin with. Their unit colors are metallic purple with dark indigo lighting and most of their land-based mechanical units resemble the alien species of the planet. 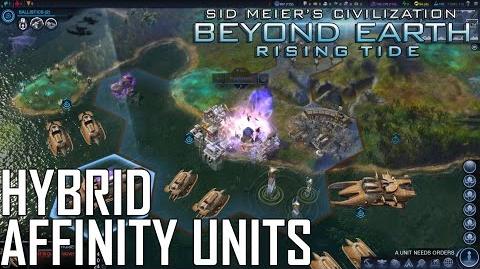