Sultan of the Saadi Dynasty

Ahmad al-Mansur (1549 – 25 August 1603) was the Sultan of the Saadi dynasty from 1578 to his death in 1603, the sixth and most famous of all rulers of the Saadis. His powerful army and strategic location made him an influential player in both Europe and Africa during the late Renaissance period. He leads the Moroccans in Civilization V: Brave New World.

Ahmad al-Mansur speaks Moroccan Arabic, considered by most linguists to be the most deviated major variety from Modern Standard Arabic. On his diplomacy screen, he is standing in front of a large caravan tent which is alongside an oasis within the Sahara, illuminated under an early evening sky.

Ahmad al-Mansur tends to aim for a cultural victory.

Ahmad is not very bold, but can often declare friendship with others. He is quite easy to befriend and is a trustworthy ally, given that he is also quite loyal.

Culture and improving tiles in his territory, as well as building a defensive militia consisting primarily of fast-moving mounted or armored units.

Ahmad is one of the leaders most likely to use espionage, and will often make use of air units in the later eras.

Ahmad will frequently try to befriend and protect city-states.

As one of the most influential leaders in the history of North Africa, Ahmad al-Mansur had a pivotal impact on the future of Morocco. Serving as the sixth Sultan of the Saadi Dynasty during the 16th century AD, Ahmad al-Mansur was known as a cunning diplomat who leveraged Morocco's strategic location to position his kingdom as a major player on the world's stage during the Renaissance.

As the fifth and youngest son of Sultan Mohammed ash-Sheikh, Ahmad al-Mansur's path to the throne of Morocco was not assured. His oldest brother, Abdallah al-Ghalib was the designated heir, and he ascended the throne in 1557 AD following their father's death. Unfortunately for al-Mansur, his older brother believed eliminating his siblings was the simplest means of securing his throne, and so al-Mansur and his brother Abd al-Malik fled the country, living within the Ottoman Empire for nearly two decades.

Following the death of Sultan Abdallah al-Ghalib in 1574, his son Abu Adallah Mohammed ascended the throne despite the rightful heir being Abd al-Malik. Raising an army with the assistance of the Ottomans (where al-Mansur and his brother had remained in exile), Abd al-Malik invaded Morocco and successfully deposed the usurper Abu Adallah Mohammed. Unfortunately for the two warring claimants to the Moroccan throne, they both died at the Battle of Ksar-el-Kabir in 1578, leaving Ahmad al-Mansur to ascend as Sultan.

Morocco's armies dealt severe losses to the opposing force, which included the armies of Portugal who had sided with the usurper king. In taking thousands of Portuguese prisoners, al-Mansur was able to deftly negotiate a steep ransom for their safe return - leaving Morocco's coffers replenished with Portuguese gold.

Once firmly established on the throne, al-Mansur enjoyed newfound prestige as the leader of an emboldened Morocco flush with wealth. He immediately began efforts to reform the administrative system of his nation, implementing new forms of taxation. He also looked to expand the reach of his empire through campaigns against neighboring Songhai, which he hoped would provide new sources of income for the kingdom. Despite victories and sacking multiple Songhai cities, the problems of administering such a distant land across the Sahara proved too much even for al-Mansur.

Unfortunately, the expenses involved in Al-Mansur's various projects - military and territorial expansion, outlays for new construction, and grand displays of cultural and artistic expression - led to the eventual depletion of Morocco's vast treasury. As the purse strings tightened, al-Mansur was forced to restrict his great ambitions for the kingdom. Morocco was also faced with a difficult task in maintaining control over the distant territories it conquered, and many of these areas eventually fell out of Moroccan control.

With Ahmad al-Mansur's passing in 1603 - being struck down by the plague - Morocco's power and influence began to wane. By 1620 the Songhai cities had been lost. Moroccan trade routes were usurped by others, and fiscal troubles plagued the sultanate. In the end, many of the advances garnered by al-Mansur's exceptional administrative and diplomatic skills were lost by his successors.

Ahmad al-Mansur is widely viewed today as one of history's greatest diplomats, excelling in the art of balancing friend and foe, Christian and Muslim. Al-Mansur's carefully crafted diplomatic schemes are credited with allowing Morocco's continued independence despite the scheming of many neighboring kingdoms as well as the powerful Ottoman Empire. His reign was marked by religious tolerance, scientific learning, and an artistic flowering in North Africa not known for many decades before or after.

The grave of Ahmad al-Mansur is located in the so-called Saadian Tombs in Marrakesh, where some 60 members of the Saadi dynasty are interned. The Tombs, built of cedar and marble, were discovered in 1917 by archaeologists and are today a major attraction for tourists to the city.

The people of Morocco await your guidance, great Sultan Ahmad al-Mansur of the Saadi Dynasty. Well known for your skill as both a negotiator and a diplomat, your careful words allowed the forging of new alliances, securing the sovereignty of your nation and its people for decades. And still, when words failed, you found equal success in conquest, leading the Moroccan armies to victory on the battlefield while greatly expanding the grasp of your empire.

Wise and respected Sultan, the people look to you for leadership. Can your diplomacy match that of your rivals, or will you meet them sword in hand? Your once great kingdom yearns for that former glory - can you build a civilization that stands the test of time?

Portrait of Ahmad al-Mansur, by an unknown 17th century artist 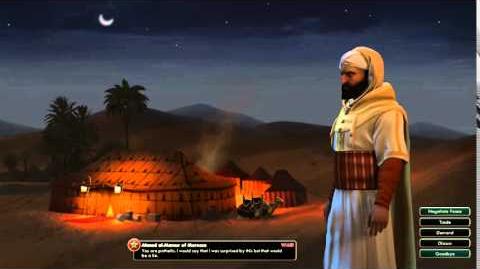 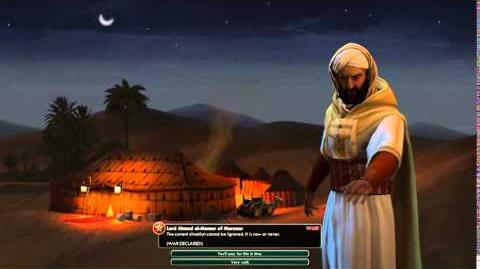 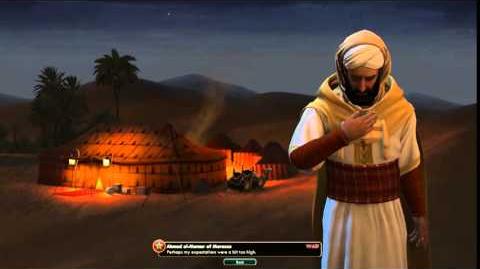 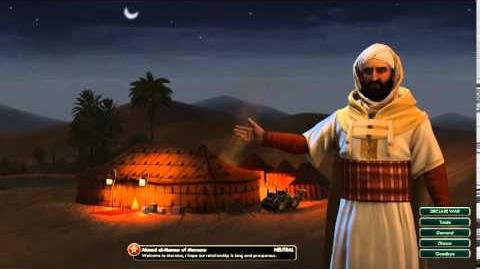