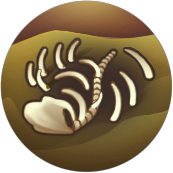 An Alien Skeleton can result from killing a Siege Worm. Alien Skeletons can otherwise be found in-situ, that is as pre-existing features in the game world as with alien ruins and pre-landing human ruins.

You can use an Explorer unit to set up an Expedition to study the bones.

In the E3 demo, an expedition resulted in; "After many fruitless months excavating the Alien Skeleton, an alien lifeform approached from the wilds as if it was called. Your Expedition team quickly armed itself, but this proved unnecessary. Whatever reverence it held for the dead skeleton seems to have transferred to you. An alien Wolf Beetle is now under your control!"

Early exploratory teams on the surface found the occasional skeletal remains of giant, alien creatures but had neither the skills nor equipment to excavate these. Once the colonies began to send out their own teams of explorers and researchers, those with training in paleontology took an active role in unearthing body fossils and trace fossils in the hopes of better understanding the evolution of life on this planet. Such efforts occasionally bore surprising results.

Retrieved from "https://civilization.fandom.com/wiki/Alien_skeleton_(CivBE)?oldid=212219"
Community content is available under CC-BY-SA unless otherwise noted.