Amani, otherwise known as The Diplomat, is one of the Governors introduced in Civilization VI: Rise and Fall. She excels at diplomacy with city-states, and is also capable of swaying the Loyalty of others to your favor.

Skilled in gaining support for your civilization, and spreading its influence to nearby cities. Amani is the only governor that can be given foreign assignment in a city-state.

Unlike all the other Governors, Amani has no hard bonuses towards main statistics such as

Envoys. Civilizations controlled by humans and AI alike find that establishing Amani in one of the first city-states they meet is a great idea because those city-states are unlikely to have met any other major civilization just yet, granting them a free

Envoy. Once Amani is established, they will instantly gain Suzerain status of that city-state, which also increases Era Score. However, after this early use of Amani, most players generally do not promote Amani, instead opting for upgrading or obtaining other Governors.

This doesn't make Amani useless, however. Her Emissary promotion can assist in flipping enemy cities to you, so that you may not need to declare war, while Prestige does the opposite. Affluence is not so useful, unless a city-state across the map has many Luxury resources that you do not possess (yet). Promoter is not a promotion many will take, and its only main use is during wartime if a city is undergoing significant war weariness penalties. Finally, Puppeteer is one of the most powerful upgrades any Governor can obtain. By the time most civilizations have gained enough promotions to take this one, the most contested city-states can have upwards of 10

Envoys. Doubling the amount of

With Gathering Storm, Amani has two of her promotions replaced. Her Prestige promotion is given to Victor, the Castellan, and replaced with Local Informants, the only promotion applying bonuses outside of city-states. The 3 level penalty it applies to all enemy spies in the city is highly valuable in cities with strong and/or multiple

Districts, and only requires 2 Governor Titles. Her Promoter promotion is replaced with the far better Foreign Investor, allowing access to a city-state's accumulating Strategic resources when not its Suzerain, and double the amount when you are. This promotion is especially valuable for players pursuing a Domination Victory, providing vital resources for units and power.

Diplomats are representatives of their people to other parts of the world, and are one of the most ancient and respected roles of service to the state. Diplomats are traditionally accorded privilege and respect, and in turn the diplomat shows both politesse and courtesy to her host. 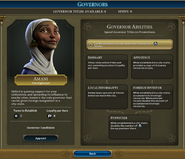