Production if there is a Nubian Pyramid adjacent to the City Center.

Tries to keep the maximum number of


"Provide what the land does not. Your people will love you for it."

Wikipedia has a page called:
Amanitore

Amanitore (? – c. 20 CE) was a Kandake of the ancient Kushitic Kingdom of Meroë, whose reign was marked by extensive building and restoration projects of temples, pyramids and reservoirs. She leads the Nubians in Civilization VI.

Nubia is the Land of the Bow, and their civ's archers are second to none. Amanitore led the historical Nubians on their greatest building spree; she does the same here with her fascination with city planning and

Amanitore, watchful Queen of Nubia, the empire you command shall claim the horizon as its border. Don't fear those who covet your abundant gold, for your archers can part their hair at five hundred paces. Your cities shall know prosperity and piety, wise queen, for the Land of the Bow honors its past as surely as it builds its own future.

Amanitore's unique agenda is City Planner. She always tries to have the greatest possible number of districts in her cities and likes civilizations that do the same.

Amanitore's leader ability is Kandake of Meroë. It provides her cities with 20% bonus

Production toward districts, or 40% if they have Nubian Pyramids adjacent to their City Centers.

Nubia will want to scout aggressively for desert tiles while rushing toward Masonry. With that technology in hand, they can place down their cities, always striving for a cluster of their pyramids in the center. Districts placed next to these pyramids will provide amplified yields, powering the civ's development. Finding mines is also a key priority: historically all the mineral riches enjoyed by Egypt came from Nubia and this civilization can get rich from minerals as well. And if they need to defend their cities, they have the world's best ranged units who should easily be up to the task.

Amanitore is voiced by Fatma Abd Elsalam. She speaks a Nubian language.

Accepts Delegation from Player's: Your delegation arrived unharmed. It was truly a pleasure to show them around our capital.

Accepts Player's Declaration of Friendship: Your warm words linger like the evening sun. We are privileged to call you friend.

Rejects Player's Declaration of Friendship: Perhaps, one day, with much effort on your part, Nubia might consider you a friend.

Requests a Declaration of Friendship: The Nubian people speak highly of your own. Let us formalize our friendship with a public declaration!

Player Accepts Her Declaration of Friendship: How gracious of you.

Denounced by Player: I will not ask how you dare say such a vile thing. With you, I always expect the worst.

Denounces Player: You are the worst kind of flood—when you deign to show up, you cover everything you touch in muck.

Too Many Troops Near Her Border: The Land of the Bow does not approve of your army's proximity. I urge you to recall them.

Invitation to Capital: I will tell you of our glorious capital if you share tales of your own.

Invitation to City: While nearby, might you visit our city? Our pyramids offer an impressive sight, especially at dawn.

Kandake Amanitore ruled Nubia at the turning of an era. A powerful queen, feared by her enemies and beloved by her people, she was one of the last great builders of the Kingdom of Kush. Amanitore restored the Land of the Bow to its greatness following a period of turmoil. Her rule was long and her works lasting.

At least, that is what historians have pieced together. Two millennia and one dead language later, there is little surviving written record of Amanitore in the form of scrolls or other documents. What remains is carved into the very stone of the buildings she left behind.

The most nebulous aspect of Amanitore's life is who she was before she became queen. Indeed, her personality is a cypher. We can only interpret. One abstract depiction of the kandake shows her mercilessly slaying enemies she has already subjugated. Was it from an actual incident where she ordered the execution of rebels, or propaganda proclaiming her righteous vengeance against those who would be enemies of the state?

The fuzzy details of Amanitore's lineage are less important than the role she held. The title of kandake—or “candace,” as the Romans called it—roughly translates to “queen-mother,” but it did not equate to a regent ruling on behalf of an heir too young to hold power. Instead, the kandakes were independent queens who ruled alone with husband consorts or with kings in a form of co-rulership.

Amanitore's reign took the latter form, with Natakamani as her equal. There is scant information on any aspect of her life before she became queen (around 1 BCE). Still, monuments always depict both co-rulers as adults, so she was likely in her prime when her rule began. In fact, the depictions of Amanitore and Natakamani deliberately present the two as equivalent, particularly in religious buildings, which was uncommon for the time.

With Egypt a Roman vassal and Rome on amicable terms with Nubia, no regional conflicts threatened Amanitore's reign. The relatively peaceful time and the collaborative autonomy of co-rulership let Amanitore pursue what would become her legacy—an extended period of building that brought great prosperity to the Meroitic kingdom. Among her works were the construction of Nubian pyramids and tombs, restoration of Amun's temple in Meroe, and infrastructure projects, such as the reservoirs built near the capital.

Amanitore also rebuilt the temple of Amun at Napata—the same temple that Roman invaders had destroyed just two decades prior. As Amanitore’s name incorporated the name of the god Amun, it is reasonable to assume its restoration was a point of pride for the busy queen. Indeed, her efforts helped revive Jebel Barkal to at least a fraction of its former glory.

Although the queen enjoyed cordial relations with Rome, the decades-earlier reprisal raids into Egyptian (which is to say, "Roman") territory had recovered bronze statues of Augustus Caesar as spoils of war. An apocryphal tale describes Amanitore burying the decapitated head of one such statue beneath temple stairs in Meroe so Nubians would always walk over the Roman emperor responsible for razing Napata. (It was most likely Kandake Amanirenas, her predecessor, who actually did this.) Whether or not she was actually responsible for its burial, the "Meroe head" of Augustus Caesar was recovered in the early 20th Century—found beneath a flight of temple steps.

As with the confusion surrounding Amanitore's ascension, we know very little about the end of her reign. Some estimates put the date of her death at roughly 20 CE. Treasure hunters have long since plundered her tomb in Meroe.

Despite the many unknown aspects of Amanitore, the extensive building program she left behind inspired later kandakes to expand upon her work, which in turn led to a flourishing of Meroitic culture and fortunes through the Second Century. Archaeologists continue to uncover examples of her influence, including a set of recently unearthed Nubian pyramids built during her reign. 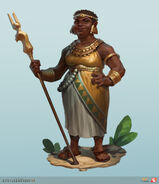 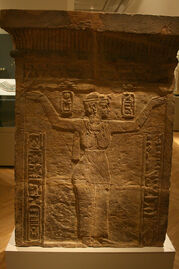