For hundreds of years the women of the Punjab kept the traditional arts alive … embroidering their phulkaris with bold floral designs, covering the mud walls with amazing murals, drawing the chowkpurna on thresholds. Then there was Amrita Sher-Gil, born to an Indian father and Hungarian mother, who fused Indian styles and themes with European techniques and tastes. But she died at the age of 28, and her brilliance only shined after her death.

Amrita was born in Budapest in 1913 AD, and displayed a precocious talent for painting. Throughout her childhood, the family would move back-and-forth between India and Europe. At the age of 16, Amrita entered the École des Beaux-Arts in Paris, where she greatly admired the recent work of Cézanne, Modigliani, and Gauguin. Her own work tended, however, to be stiff and “academic,” as she tried her hand at still-life, landscapes, portraits, and nudes. Convinced that her artistic path lay in India, she relocated to the subcontinent in 1934, settling in Simla in early 1935.

Sher-Gil’s first efforts were directed at finding a mode appropriate to herself. Influenced by the cave paintings common in western India, she sought to develop a style in marked contrast with other Indian artists of the so-called Bengali school. She used colors that were unbridled and bold – in direct contrast to the pale and muted hues of accepted Indian artists – with sorrowful subjects, mostly images of emaciated men and women in everyday scenes. In 1938 Amrita returned to Hungary, there marrying her cousin Victor Egan. After a year in Europe, the couple returned to India to settle in Saraya, a small village, then moved to the sprawl of Lahore. There, just days before the opening of her much-anticipated first solo show, she slipped into a coma and died in December 1941. 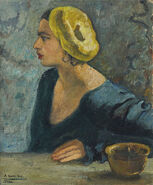 Self Portrait
Community content is available under CC-BY-SA unless otherwise noted.
Advertisement