type in Civilization II. It occurs when the player undertakes a

Anarchy is the absence of any central government. Although some theorists have discussed it as a viable form of social organization, Civilization II treats it as a transitional state during changes of government.

Tradearrows produces one less. taxes are collected, but no maintenance is paid on buildings. No research is conducted. We Love the King Day has no effect under anarchy.

The default title of the player during anarchy is Mr. for male characters and Ms. for female characters. If the High Council is consulted during anarchy, all the ministers argue and talk loudly over one another before their windows slam shut to a stylized A.

Main article: Oedo year (Civ2)
In Civilization II, anarchy cannot last more than five turns. A civilization in anarchy will always (and only) allow the player to transition to another government during the city phase of an Oedo year, every 4th turn after game start. A player who receives a new government technology during an Oedo year can transition without any period of anarchy. A player who wishes to minimize his civilization's time under anarchy during other revolutions must launch the change of government during the turn of play before an Oedo year, so that the transition occurs during the middle of that turn's city phase.

The Statue of Liberty wonder, besides making all forms of government available, limits all periods of anarchy between governments to one turn.

Anarchy, or the lack of government, occurs only when you lose control, either because civil unrest topples your current government, or immediately following a revolution. Civil unrest continues as long as conditions are ripe for it. In the case of a revolution, your people’s attitude naturally stabilizes. After a few turns, once your civilization settles down, a dialog box appears listing all the possible forms of government your culture has available. Choose the one you like, and that regime takes effect immediately. —Manual

You have temporarily lost control of the government. You continue controlling the movements of your units, and cities continue to operate on their own, but some important functions of your civilization grind to a halt until control is restored...—Manual

Anarchy represents not so much a government type as the lack of any stable government. Anarchy occurs when your civilization's government falls, or when you decide to have a Revolution. After a few turns of Anarchy, you can rebuild a new government. Anarchy is similar to Despotism, except that the corruption rate is VERY HIGH. However, no taxes are collected during a period of Anarchy, and no scientific research is conducted.—Civilization II Civilopedia 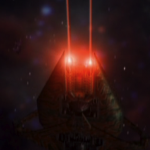