• Sarah Harrop as a Muse

Sarah Harrop as a Muse (

Her work and life were summed up by the German Johann von Goethe, an acquaintance, thus: “The good Angelica has a most remarkable, and for a woman unheard-of, talent …” A child prodigy, widely travelled, portrait painter to English aristocracy, immensely popular and made quite wealthy, leader in the Neoclassical movement, elected to Rome’s Accademia di San Luca, and one of two females to help found England’s Royal Academy in 1768 AD. Remarkable, indeed.

Maria Anna Angelica Catherina Kauffman was born in October 1741 in Coire, Switzerland; her father, Johann Josef, was a modestly successful painter of church murals. As soon as she was able to hold a piece of chalk, Angelica began sketching, copying her father’s collection of art prints. Johann, recognizing her budding talent, began instructing her in various drawing and painting techniques. At the age of 11, the girl supposedly painted a portrait of the Bishop of Como, her first commission.

Angelica's reputation grew, even as she matured, and she received a growing stream of commissions from the rich and famous. In 1760, Johann moved the family to Milan because he wanted his daughter to study paintings of the Renaissance masters. But Angelica was considering a career in the opera; however, a family friend warned that the opera was a dangerous place filled with seedy people and would lead to a life of sin. Thus, at her father’s urging, Angelica chose art over opera.

In 1766, Angelica relocated from Rome to London, where her fame preceded her. She was inundated with commissions, even a personal visit by the Princess of Wales, making Kauffman both a celebrity at court and greatly in demand among the snobs of England. Over the next 16 years, she came to be hailed as the greatest portraitist of her age. Angelica eventually returned to Italy, and she died in Rome in 1807. 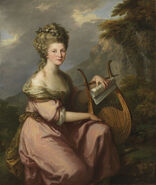 Sarah Harrop as a Muse
Community content is available under CC-BY-SA unless otherwise noted.
Advertisement