One of the biggest new features in the Rising Tide expansion is the addition of floating cities, with greatly expands aquatic gameplay.

In Rising Tide, players are able to build aquatic cities. By default, only the North Sea Alliance and Chungsu have the ability to build their capitals on the ocean. Players, however, have an option that make all colonies start on the ocean.

Objects previously on land only[]

Many resources and objects that were land based in Beyond Earth are now also found in the water. Explorers, in turn, do more when embarked to exploit these resources.

As mentioned earlier, aquatic cities do not acquire new tiles through culture the way land cities do. They have a special project they can access when choosing production. The project requires production to complete, therefore cities with higher production can move more quickly. Each successful project will move the city one tile, and the city will then instantly claim all tiles around its new location. Therefore, a city has the potential to capture three tiles of territory EACH TIME it moves.

Here are some points to consider while developing an effective aquatic city strategy:

Unique Aquatic Gameplay in Other Games of the Series[] 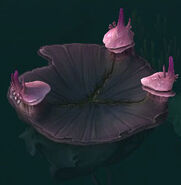 An ocean-bound floatstone quarry, as shown in a Rising Tide loadscreen

An aquatic city, as shown in a Rising Tide loadscreen

A kraken and a submarine, as shown in a Rising Tide loadscreen