The Arabian people (or Arabs) represent a civilization in Civilization V.

Gold (in vanilla and Gods & Kings) or their extended Caravan range (in Brave New World) - but also because they gain access relatively early on to the Bazaar, a terrific unique replacement for the ordinary Market. The Bazaar gives an additional copy of each luxury resource worked by the city, giving the Arabians much greater bargaining power, even in the early game. Combine this with the Commerce policy tree to maximize land trade power.

The Arabians are also the best civilization to settle deserts (except obviously Morocco and situationally the Inca). Not only does the Bazaar give them additional

Gold from oasis tiles (consider this when searching for places to found new cities), but the

Oil is usually abundant in deserts. Combine these bonuses with Petra, if possible, to create a fantastic desert paradise city!

A slightly less obvious strength of the civilization is religion. Their unique ability in Brave New World also allows trade routes to spread religious influence much faster, which means that the Arabians can easily turn their religion into an effective weapon for achieving victory. Thus, by combining the two auxiliary aspects of the game (

Gold and religion), they can aim for any type of victory!

Their unique unit, the Camel Archer, is one of the better ranged units of the Medieval Era, allowing them to go on the offensive upon researching Chivalry. Arabia can do this easily by upgrading a Horseman/Chariot Archer army with Bazaar

Gold. The Camel Archer operates similarly to the Keshik, except with a higher ranged and melee strength and fewer starting promotions.

To summarize, Arabia is powerful at both domination victories and diplomatic ones (via their

Gold). It's very hard to combine the two, as a warmongering player will find little trade with AI civs and thus negate their Bazaar benefits.

The Muslim Empire of the Caliphate - also known as the Islamic Empire or the Arab kingdom - came into existence after the Prophet Mohammed's death in 632 AD, created by Mohammed's disciples as a continuation of the political authority he established. During its long existence the Caliphate would grow to enormous size and power, dominating Spain, North Africa, the Middle East, Anatolia, the Balkans and Persia, ruling an empire that at least rivaled that of the Romans at the height of their power.

The Arab Empire began in Medina, on the Arabian Peninsula, in what is now known as Saudi Arabia. The interior is generally inhospitable desert - barren, sandy and hot with summer temperatures reaching as high as 130 degrees F. Medina and Mecca occupy the more fertile coastal regions along the Red Sea.

The first "caliph" (head of state) of this empire after Mohammed's death was Abu Bakr, who in turn was followed by three other "Rightly Guided Caliphs" in succession. After the death of the fourth, Ali ibn Abi Talib, in 661, a power struggle ensued between factions backing rival claimants, with the Umayyad family eventually emerging victorious. Argument about who was the legitimate caliph would rage for millennia and have had a significant effect upon Islamic and world history that continues to this day.

The Umayyads were a merchant family based in Mecca. They had converted to Islam in 627, becoming prominent supporters of Mohammed and his successors. The early Umayyad caliphs were based in Damascus, Syria, and the Syrian army formed the backbone of the Arab military forces. The Umayyads expanded Arabian power east, building outposts and sending expeditions into Central Asia and northwestern India. In addition the Umayyads launched the invasion of North Africa. In the 7th century they constructed a Mediterranean fleet with which they launched a series of unsuccessful raids against Christian [[[Constantinople]].

The Umayyad Caliphate reached its zenith under the reign of Abd al-Malik (reigned 685-705). In the west, Abd's armies overran much of Spain, while in the east the Caliphate invaded Sind in India and conquered Bukhara, Samarkand, Khwarezm, and many more places too hard to spell. al-Malik also oversaw a reorganization of the Caliphate's bureaucracy, economy, and the institution of a post service. During his reign the arts flourished, particularly architecture.

The empire suffered a decline after Abd al-Malik's death. A series of mediocre caliphs combined with economic troubles and military reverses in the east and west fueled tribal rivalries within the Caliphate, and in 750 the Umayyads were defeated and overthrown at the Battle of the Great Zab River.

The Umayyads were defeated by the Abbasids, another powerful family. The first Abbasid Caliph, Abu al-Abbas, was a ruthless leader who upon achieving power immediately set about exterminating anyone else who might have a legitimate claim upon the throne. He was successful, as the Abbasids would remain in power for another three centuries. Not without a certain grim panache, he gave himself the name as-Saffah, which translates as "the bloodletter."

The Abbasids shifted the capital of the Caliphate to Baghdad. This reflected its concentration on events in the east - Persia, India, Central Asia - and subsequent de-emphasis on North Africa and the Mediterranean. The Abbasids were more overtly religious than the Umayyads, and under them the Caliphate more closely followed Islamic law.

Harun al-Rashid (reigned 786-809) was the fifth Abbasid caliph. He ruled Arabia at the height of its wealth and power. In his early years Harun led military expeditions against the Byzantine Empire; his successes earned him the nickname al-Rashid, "the one following the correct path." While Rashid did have to put down a number of internal revolts, the empire was mostly at peace during his reign, and the Caliphate grew monumentally, spectacularly wealthy. For more details on Harun al-Rashid, see his Civilopedia entry.

The Arab empire of the medieval period was far more advanced than contemporary Europeans; Harun al-Rashid's Baghdad may have held a million people at the same time that Charlemagne's Aachen was a "capital" of ten thousand. Centers of learning attracted scholars from across the Muslim world to great cities such as Baghdad, Damascus, and Cordoba. The Arabs of this period made many advances in medicine, astronomy, mathematics, and other areas, as well as translating many of the classics of the Ancient Greeks into Arabic, thereby saving them from destruction.

During the period of the Crusades, Christian Europe began a sustained assault against the Arabic world. The greatest of Muslim generals from this period was Salah al-Din, better known as Saladin, who successfully defeated the Third Crusade and recaptured Jerusalem for the Arabs.

As the Middle Ages ended, however, the Empire began to fragment under increasing pressure from both external and internal forces. The sheer size of the Empire made centralized government nearly impossible, and the caliphs were forced to put down numerous insurrections by rebellious local leaders. The debate over the rightful heirs to Mohammed's leadership continued to fester. In the west the Europeans wrested control of Spain from the caliphate, while in the east the Ottomans began their inexorable expansion into the heart of the Arabian Empire.

In 1258 a Mongol army under Hulagu Khan captured Baghdad and executed Caliph al-Musta'sim, bringing the Arabian Empire to an abrupt end.

For most of the past five centuries, much of the Arab world has been ruled by foreigners; first by the Ottoman Turks, then by the Western colonial powers. Since the onset of de-colonization in the 1950s, traditional Arab values have been modified through the combined pressures of urbanization, industrialization, and Western influence. However, the ancient tenets of Islam are still followed by millions of faithful across the globe.

Although now divided between dozens of different countries, the lands once part of the greater Arabian Empire owe much to their ancient common ancestor.

During the rule of the Caliph in the 7th century AD, the earliest known examples of pension and welfare were adopted. The elderly and disabled, as well as widows and orphans were all eligible to receive assistance and income from the government treasury.

It is said that Harun Al-Rashid presented Charlemagne with an early Islamic example of the "Water Clock," a sophisticated device that would record the passage of time by measuring the flow of water from one vessel to another. 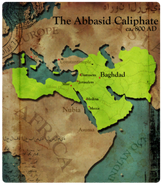