Civilian unit of the Industrial era

Special civilian unit for archaeological discoveries. May only be trained in cities with a University.

The Archaeologist is the means by which you use the new archaeological system in Brave New World. They are a civilian unit that becomes available pretty late in the game. On top of that, they may only be trained in cities with a University and may not be purchased with

Gold. They are pretty mobile (4

), and their job is to go to an Antiquity Site and dig it up, creating an Archaeological Dig. This consumes the Archaeologist, but allows you to either create a Landmark improvement or extract an Artifact to fill in a Great Work of Art slot in a Museum, Palace, Hermitage, or certain wonders. It is worth noting that an Archaeological Dig can be constructed anywhere your Archaeologist can go (rival territory if you have an Open Borders agreement), and thus artifacts can be obtained from Antiquity Sites outside your borders.

Archaeologists study human behavior in the past, primarily through the excavation and analysis of human fossils, the ruins of buildings, and the remains of human artifacts. In undertaking this effort, archaeologists work to understand the common beliefs and daily activities of various peoples throughout history. Although controversies now rage about the ownership of artifacts, treasures, and human remains recovered, thousands of archaeologists operate around the world at excavations sites, in museums, and on university campuses to further our understanding of our own past. 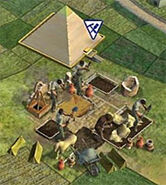