Wikipedia has a page called:
Ashurbanipal

Ashurbanipal (685 BC – 627 BC) was an Assyrian king, the son of Esarhaddon and the last strong king of the Neo-Assyrian Empire. He leads the Assyrians in Civilization V: Brave New World.

Ashurbanipal speaks Akkadian, though historically he was able to speak Aramaic and Sumerian as well. On his diplomacy screen, he is standing in his palace and holding a stone tablet.

Ashurbanipal will probably try to win a domination victory, though a scientific victory is also possible.

Ashurbanipal is very bold and hostile, and is one of the leaders least likely to be afraid. He is not very willing to overlook offenses, but tolerant of fellow warmongers and unlikely to backstab his allies. However, since he tends to declare war on every civilization and city-state he meets, he is not a particularly easy leader to befriend.

Ashurbanipal focuses on raising a large offensive army that includes a number of ranged and mobile units. His defensive army, however, will be quite small, and his cities are usually average on defense. Thanks to his unique building and the priority he places on military building, his forces will often be the best trained in the game. In the later eras, he is likely to acquire and use nuclear weapons.

Ashurbanipal also shows an interest in developing the

Production capabilities of his empire, and favors expanding his territory over increasing the

Population of his cities.

Be especially careful when fighting Ashurbanipal during the Classical and Medieval Eras, throughout which he will make heavy use of Siege Towers. To protect against them, keep your cities surrounded with defensive lines of infantry and garrisoned with ranged or siege units to bombard them as they approach.

Ashurbanipal, King of Assyria for over 40 years during the mid-7th century BC, is most famously noted in history for his seemingly unquenchable thirst for knowledge, which he sustained through both careful negotiation and ruthless conquest. Whether through direct conflict or simply the threat of violence against those who refused him, Ashurbanipal sought to gather the texts and histories of a wide range of cultures and civilizations surrounding his empire. In forming the great archive of cuneiform manuscripts and stone tablets that bears his name, Ashurbanipal established one of the most remarkable libraries of ancient material found anywhere in the world. Aside from his scholarly pursuits, Ashurbanipal was also known to be a fearsome warrior, who deftly managed both the military and administrative tasks required of him. As an intimidating force with both the intellect and might to lead the formidable Neo-Assyrian Empire, Ashurbanipal's legacy as one of Assyria's greatest kings has endured for more than two thousand years.

Although historical records from the period are intermittent, it's known that Ashurbanipal was born early in the 7th century BC, towards the end of a nearly 1500-year period of Assyrian supremacy in the surrounding region. His father, Esarhaddon, was crown prince at the time of Ashurbanipal's birth, and saw to it that his son received training and education as both a soldier and a scholar. Raised in a small palace known as bit reduti ("House of Succession") in Nineveh, Ashurbanipal was given the palace when Esarhaddon named him crown prince in 672 BC following the death of Ashurbanipal's elder brother. His training there ranged from kingly pursuits such as horsemanship, chariotry, archery, craftsmanship and royal decorum to the likes of divination, mathematics and engineering. Although still debated, it has been speculated that Ashurbanipal may have been the first Assyrian king capable of both reading and writing, allowing him to understand a variety of ancient scripts and languages. At a young age he began handling administrative duties within the royal court of Assyria, managing a number of construction projects and appointing local prefects in his father's stead. Following his father's death in 669 BC, Ashurbanipal ascended to the throne and prepared himself to deal with a number of conflicts on the horizon.

As is often the case with any change in rule, as king, Ashurbanipal was forced to deal with some of the troubling issues left behind by his father. Assyria was embroiled in a war with neighboring Egypt, and Ashurbanipal was forced to take decisive action to secure his grip on the empire's distant territories. Swiftly deploying his forces, Ashurbanipal met with repeated successes in Egypt and - after further incursions by the Assyrian army - Ashurbanipal assured firm control over many of the contested regions, including Judah, Israel, Cyprus, and much of Asia Minor.

A skilled administrator, Ashurbanipal dedicated much of his time to managing the needs of his people at home, despite devoting long days to coordinating the efforts of his military. By carefully selecting able and reliable regents and local rulers for the far-flung reaches of the Assyrian empire, Ashurbanipal was able to focus his own efforts elsewhere. His upbringing and education are credited with his skill in governance; the empire enjoyed relative stability and ongoing economic prosperity in spite of the conflicts in the region.

Taking great pride in his education and academic pursuits, Ashurbanipal was a patron of both the arts and sciences, and throughout his reign he brought both to the empire with unbridled enthusiasm. To fill his Royal Library at Nineveh, Ashurbanipal sent scribes across the empire to collect and copy texts of nearly any available subject. As with many ancient kings, Ashurbanipal also commissioned artists and sculptors to create depictions of the events occurring throughout the empire, along with numerous reliefs depicting his own personal accomplishments and talents.

The Royal Library of Ashurbanipal, found in the ancient Assyrian capital of Nineveh, was home to Ashurbanipal's extensive collection of historical texts and clay tablets. Incorporating materials from a wide range of subjects - including folk tales, religious rites, medical and scientific works, and histories - the library is among the most extensive ever uncovered by modern archeologists. The Royal Library contained, among other literary treasures, the Enuma Elish, the Babylonian "Epic of Creation," and the Sumerian Epic of Gilgamesh. English archaeologist and historian Sir Austen Henry Layard was the first to locate the library ruins in 1849, with most of the material he recovered being shipped to the British Museum, where it remains in their collection to this day. In total, over 30,000 tablets and other materials have been catalogued by the museum as part of the "Ashurbanipal Library Project."

Following Ashurbanipal's death around 627 BC, the Assyrian Empire entered a period of decline, as numerous parties vied for power. Unrest in the urban centers and within the ranks of the military was worsened by the conflict between his brother Sinsharishkun, the general Sinshumulishir and the eventual king of Babylonia Nabopossar. This turmoil only served to strengthen the legacy of Ashurbanipal, as his people had enjoyed relative stability and prospered during his reign. In establishing the Royal Library, Ashurbanipal set the first standard for state-supported scholarship and provided modern scholars and historians with an unequaled cache of artifacts that has greatly contributed to our knowledge and understanding of the peoples and the kingdoms of his era.

A massive bronze statue of Ashurbanipal was constructed in 1988 and sits across from the San Francisco City Hall in San Francisco, California.

The people bow to your esteemed will, o wise and illustrious King Ashurbanipal of Assyria. Across the world, you are known as both a scholar and a warrior, and yet the legends represent merely a glimmer of your true ambition. Although your enemies cowered at the thought of your ferocity in conquest, you were most proud of your intellectual pursuits. Your thirst for knowledge led to your establishment of the royal library at Nineveh, which came to represent one of the greatest collections of ancient texts and tablets found anywhere in the world - securing your legacy as one of Assyria's greatest kings.

Wise and fearsome king, the time has come for you to return the kingdom of Assyria to its greatest heights. Will you once again strive to acquire the knowledge and histories of all the world's peoples? Can you build a civilization that will stand the test of time? 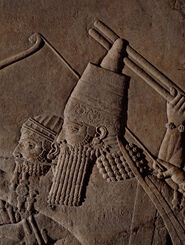 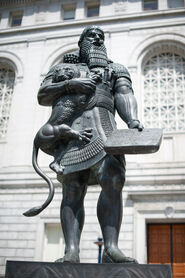