Leader bonus - Drive Out The Aggressors

Combat Strength when fighting in Rainforest, Marsh, and Woods tiles, and +1

Movement if they start their turn there. Both of these bonuses are doubled in tiles inside Vietnamese territory.

Leader agenda - Defender of the Homeland

Likes civilizations that have never declared war on Vietnam. She will never forgive those who have, with her opinion decreasing further with each turn the war lasts, and this decreased opinion never recovering.


"I only want to ride the wind and walk the waves, slay the big whales of the eastern sea, clean up frontiers, and save the people from drowning."

Triệu Thị Trinh (8 November 226 – 4 April 248), better known by the honorific Bà Triệu or Lady Triệu, was a Vietnamese warrior who resisted the Eastern Wu occupation of Vietnam and became a popular folk hero in Vietnamese culture. She leads the Vietnamese in Civilization VI.

Culture – or as a base from which to launch a Domination Victory.

Bà Triệu, your people will remember you as a goddess. Stand against those who would try to rein in your storm, and raise your sword in defiance. Neither family nor foe will hold you back.

Bà Triệu's unique agenda is Defender of the Homeland. She likes civilizations that have not declared war on Vietnam, and hates those that have, never forgiving their transgression, as her opinion decreases further each turn the war progresses, and this decreased opinion never decays.

Her leader ability is Drive Out The Aggressors. Her units gain +5

Combat Strength when fighting on Rainforest, Marsh, or Woods tiles, and +1

Movement when they begin their turn on them, both of which are doubled if these tiles are in Vietnamese territory.

Vietnam is a tough Civilization to conquer. Where other Civilizations' units get bogged down in tough terrain, Bà Triệu’s military units gain additional movement and defense while in Marshes, Woods, or Rainforest, giving her a clear advantage when fighting in such regions. Additionally, she can build Thành districts without the typical population requirements, providing an extra layer of defense to her homeland and providing additional

Culture. While Ba Trieu’s specialty Districts – not including the Thành, which, unlike the Encampment is not a specialty District - are limited to Woods, Rainforest, or Marshes, her Builders can plant forests earlier, freeing new tiles for new Districts. Vietnam is a highly effective defensive Civilization, well-poised to seek military or cultural victories.

Bà Triệu is voiced by Ha Le Giang. She speaks modern Vietnamese with a northern (Hanoi) accent. She refers to herself as "Triệu Trinh Nương": Triệu Trinh, as in Triệu Thị Trinh, is her alleged full name, although there was no historical record mentioning this name until the 20th century; and Nương (Sino-Vietnamese for 娘 niáng) means "Lady" or "Miss," an archaic honorific for a young woman. She also uses the pronouns ta for herself and ngươi for the player, indicating she looks down on and is placing herself above the player in her views on social and power rankings.

According to Andrew Alan Johnson, the writer of Civilization VI from Firaxis Games, with Bà Triệu's lines they "were going for that 'list of those who have slighted me' feel; a lot of these will be more present in the non-voiced bits. As far as references to Thang Long and Hanoi... yes, they're anachronistic. I love the name, though, of the 'Lake of the Returned Sword,' and love the grandeur of medieval Thang Long. Better than 'Yep, still up here on that mountain, plottin' your murder...' But a hardcore Vietnam history buff will see some anachronisms. Above all, I really didn't want to refer to any American War tropes, as fan service-y as they would feel."[1]

Accepts Delegation from Player: Your delegation has seen the beauty of Vietnam, and the fierceness of its people.

Rejects Delegation from Player: You say they come in peace, but I cannot allow any foreign infiltrators.

Accepts Player's Declaration of Friendship: There! I have taken you off the revenge list.

Rejects Player's Declaration of Friendship: Vietnam stands alone. We do not need you.

Requests Declaration of Friendship: Let our people share each other's burdens, and the struggle will be easier.

Player Accepts Declaration of Friendship: Our spears unite against our foes!

Player Rejects Declaration of Friendship: You know what happens to my enemies, right?

Denounced by Player: You cannot content yourself with ruling your people, but you must interfere with mine as well? I shall tell the world of your crimes!

Denounces Player: Look here, you snake. One day there will be a great reckoning between our peoples, and justice will be served to you.

Invitation to Capital: Welcome to Vietnam! Come and have bird's nest soup in our capital.

Invitation to City: Let me tell you of the citadels of Hanoi, and the dawn mist that clings to the Lake of the Returned Sword.

Vietnam has a long history of wars with those who would seek to conquer it. Some of the leaders of these fights are regarded as heroes, or even local divinities. One of the earliest of these was named Triệu.

In the early 200s AD, northern Vietnam was occupied by the Wu Kingdom – one of three Chinese kingdoms that were struggling for power across the continent. It would have been a tense situation – the Wu already on edge and nervous in their occupation of what they considered a “barbarian south,” and the Vietnamese constantly agitating for independence. The Chinese might well have remembered the experience of the Han Dynasty, and the uprising of the Trưng Sisters over a century before – the Vietnamese certainly did. And in this environment, in a province then called Cửu Chân, near present-day Hanoi, came a remarkable woman. Bà Triệu (“Lady Triệu,” also called Triệu Thị Trinh, though her original name is unknown) fought not only the occupying Chinese, but also to her own society’s expectations of her. She reportedly said, “I’d like to ride storms, kill the killer whales in the open sea, drive out the foreign aggressors, reconquer the country, undo the ties of serfdom, and never bend my back to be the concubine of whatever man.”

Her early life was fraught with loss, oppression, and abuse. She was orphaned, and raised by her brother and his wife, who was less than accepting of the extra mouth to feed. Life was difficult in Vietnam during that time, but Triệu decided to do something about it.

When Triệu turned nineteen, she left her abusive household and murdered her sister-in-law on the way out. She fled to a nearby mountain and began to prepare for war, day and night, for months on end. She was angry: about her past, about the oppression her people faced, about the way women were expected to live at the time, and she sought a way to end these injustices. Word began to spread about a mighty warrior on the mountaintop preparing a rebellion against the Chinese, and warriors flocked to Triệu. These rumors led her brother (who didn’t seem to mind that his wife was dead – perhaps this says something about Triệu’s sister-in-law…) up the mountain, where he begged her to give up her fight. Triệu wouldn’t be dissuaded, and she ultimately convinced her brother to join her and her thousand-warrior army.

In 248, Bà Triệu struck. She fought in over thirty battles, using guerilla tactics against an asymmetrically powerful occupying force – a theme that was to recur in Vietnamese history. The Chinese at first underestimated her because she was a woman, but as time went on, she became a near-mythic, terrifying figure. Rumor had it she was over nine feet tall and rode into battle on an elephant, crying out with a voice like a temple bell. She wore bright golden armor or, on other occasions, a golden robe (concealing, according to one account, yard-long breasts that she threw over her shoulders while riding) and carried a sword in each hand. Most frightening of all was her beauty and fiery temper. Her prowess on the field and uniform earned her the title “The Lady General Clad in Golden Robe.”

Lu Yin, the military general charged with putting down Triệu’s uprising, was getting tired of being humiliated by not only a young opponent, but also a female one. The Wu Dynasty escalated the conflict, pouring more and more troops into Vietnam, until eventually Triệu’s homegrown resistance could not keep up. Her armies dwindled, and after months of heavy fighting, she was ultimately defeated. However, rather than allowing herself to be taken by her enemy, she chose her own death and allegedly drowned herself in a river. She was only in her early twenties when she died.

Later Vietnamese emperors honored Bà Triệu not only as a national hero, but as a goddess. 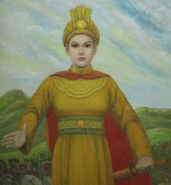 Artwork of Bà Triệu shown in "Thank You From Firaxis Games"