Ottoman unique Medieval era naval unit that replaces the Privateer. It costs no

Movement to coastal raid. Cannot be seen unless adjacent to it.

The Barbary Corsair is a unique naval raider unit of the Ottoman civilization in Civilization VI: Gathering Storm. It replaces the Privateer and is unlocked with Medieval Faires.

Following the changes to pillaging in Gathering Storm, constant coastal harassment is now a viable strategy that does not require a lot of

Production investment to have a large standing army, and the Ottomans have just the perfect vessel for that. The Barbary Corsair thrives on being an incessant annoyance more than a direct combat unit, as it has everything you can ask for to fulfill its role (very much like the Ottoman Sipahi in Civilization V): cheaper with standard invisibility for naval raider units, pillaging without costing

Movement, and most importantly, available before other civilizations unlock the standard Privateer to counter it. It is a rare unit that can actually benefit from the much undervalued Great Lighthouse Wonder and Great Admirals, since what it needs to do its job is not

Combat Strength, but only

Movement. This unit alone makes the Ottomans the bane of every civilization that has coastal tile improvements or enjoys bonuses from coastal districts and settlements, such as the English, Australians, or Dutch. Technically, Indonesia, thanks to the Kampungs and their civilization ability which incentivizes coastal constructions, is also a good target; however, they are equipped with Jong, which are available at around the same time, and their ability to instantly invoke a huge armada of Jong (thanks to Gitarja's ability) can be quite a problem if you decide to pick on them.

The best aspect of this unit lies in its brilliant timing. Similar to the Indonesian Jong, the Barbary Corsair is available in the Medieval Era, before the standard Privateer is unlocked for other civilizations. The only other two naval units in play at this time are the Galley and the Quadrireme, both are underwhelming military units with obsolete stats. Also, by being a Privateer replacement, the Barbary Corsair ignores zone of control, so catching this unit with just Galleys is nigh impossible. This allows them to have a very high degree of freedom to raid coastal cities for quite a while. Try to make the most of the Medieval Era before other civilizations gain access to Privateers - combined with policy cards like Raid and Total War, you will be rewarded with a constant income of

Gold and healing to sustain through any damage thrown back your way. You can combine this with the Grand Master's Chapel for even more

Faith from raiding, and then use this

Faith to purchase military units like the Janissaries or Bombards next era, which happens to be the peak of Ottoman power.

Faith as it can to enable other more significant Ottoman strengths. This means while both Byzantium and Ottomans are land domination civilizations, the Barbary Corsair is much more likely to be able to contribute meaningfully on a land map than the Dromon.

The Barbary Corsairs were some of the most feared and famous pirates of the Mediterranean during the Renaissance and Early Modern era. These pirates were financed and sanctioned by the Ottoman Empire, in much the way Western European states used privateers as commercial raiders. As the Ottoman Empire expanded and came into conflict with Western Europe, raids by the corsairs became more common. At the height of their power, the sight of a sleek corsair galley (or more terrifying, a fleet of them) bearing down was enough to fill the sight of all but the bravest of captains with a deep dread.

Piracy was a long-standing practice in the Mediterranean Sea, almost from the start of recorded history. The Barbary Corsairs were among the last of these groups, raiding all along the European coast. Operating from fortified ports along the Berber coast, like Algiers and Tunis, the Barbary Corsairs were famous for capturing ships and holding their crews for ransom—and often enslaving those too poor to be ransomed. Literature from the period is full of tales from escaped galley slaves, and a whole charitable industry arose out of liberating prisoners from the corsairs. But some Europeans found the prospect for riches and power attractive, and voluntarily joined the corsairs' ranks, and even served as officers. 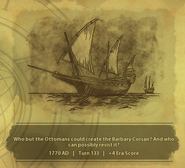