Basil II (c. 958 – 15 December 1025), also known as the Bulgar-Slayer for his subjugation of the first Bulgarian empire, was the senior Byzantine emperor from 976 to his death, and before that, a junior emperor after his father's death in 963. He leads the Byzantines in Civilization VI.

Byzantium combines religious and military tactics towards a Domination or Religious Victory.

Your enemies will fear you, King Basil II, for you were forged in the fire. Let your cunning and ambitions sharpen your blade. Protect your pride and stand against your foes, both within your walls and beyond.

His leader ability is Porphyrogénnētos. His heavy and light cavalry units deal full damage when attacking cities following the same religion as Byzantium. It also gives him access to the Tagma once he researches Divine Right.

The first priority for the Byzantines is to found a religion, and spread it, as victories in the religious realm lead to increased military strength (and vice-versa). Their unique Taxis ability gives them additional

Religious Strength for every Holy City converted, and the Byzantine founded religion spreads when defeating opposing units. Further, if you manage to convert your rival's cities to your religion, Basil's unique ability allows melee attacks to do full damage against them. In addition to these, the Tagma unique unit gives additional strength to any religious or military unit adjacent to it. Fueling these armies are bonus Heavy Cavalry (e.g. Tagma) from the Byzantine unique district, the Hippodrome, and an early-era naval unit, the Dromon, with increased damage against units and increased range. With this synergy between religion and military, Byzantium is setup to win either a Religious or Domination Victory.

Basil II is voiced by George Petpidis. He speaks Modern Greek, but it seems more like a mix between Attic and Koine, which is historically accurate since while Medieval Greek was almost identical to Modern Greek structurally and in vocabulary, the scholars and monarchs insisted on using proper pure Attic Greek.

Delegation: We send to you all the delights of Anatolia: fermented murri, olive oil, wine, kefalotyri. I hope you have the good taste to appreciate them.

Accepts Delegation from Player: Your delegation was shown the wonders of the Empire. I hope they can resign themselves to returning to your lands.

Rejects Delegation from Player: We already have some of those. Thanks but no thanks.

Accepts Player's Declaration of Friendship: Our people stand as one! Well, mine stand just a bit higher, but you see what I mean.

Rejects Player's Declaration of Friendship: You are not yet worthy enough to call yourself a friend to the Empire.

Requests Alliance: Together, let us prosper with God's grace.

Player Accepts Declaration of Friendship: You have chosen the side of Rome, and God, and me.

Player Rejects Declaration of Friendship: Friends? With you? No.

Denounced by Player: Antichrist! Barbarian! Heretic! The foulness of your works is the source of all suffering in the world!

Denounces Player: Perversion and wickedness seep from your lands and stain the world! Soon the day will come where I shall cleanse your rot.

Too Many Troops Near His Border: Armed men flying your banners amass on my border. They must leave.

Invitation to Capital: Let me show you the glory of the new Rome, and you can tell me of wherever it is that you come from.

Invitation to City: We have arranged a contest at the hippodrome between the Greens and the Blues. Care to come and make a wager?
[Note: The Greens and the Blues are historical teams in chariot racing. Their supporters' associations called demes were very influential in Byzantine and even staged a revolt against Justinian I.]

Basil II’s early life played out like a Shakespearean play. Basil was born in 958 AD to Emperor Romanos II and his second wife, Theophano. To make sure that both of his sons were treated equally, Romanos crowned Basil and his brother Constantine VIII co-emperors of Byzantium. Shortly after, Romanos died unexpectedly. Some chroniclers blamed Theophano and some hemlock for his untimely death, but at the time, she was given power as regent since her young sons were, understandably, not fit to rule yet. Her authority was contested (to her annoyance) by the court’s parakoimōmenos— a chief minister, often a eunuch, whose title meant literally “sleeping at the side of the emperor”—Joseph Bringas. In such a precarious position, Bringas didn’t last long – he fled after less than half a year of maintaining the post, and general Nikephoros Phokas took up the abandoned crown and Romanos’ widow. But in what was coming to be a disturbing trend, Theophano’s second marriage ended quickly, and she was again a widow. This time, Nikephoros’s own nephew, the general John Tzimiskes, rumored to already be Theophano’s new lover, snuck into the palace and killed Nikephoros. While things looked ready for a third marriage, the church decided that enough was enough, and Theophano was exiled. Following Tzimiskes’ death and Basil’s ascension to the throne in 976 AD, Basil brought Theophano back home to the court.

Basil was considered odd by the standards of his predecessors. He didn’t care about the finer things in life. He didn’t wear elegant robes or throw grand parties. He wasn’t exactly stoic—his temper didn’t allow for that—but he disliked the lavish lifestyle that most Emperors craved. His people, and likewise court, weren’t the fondest of him. He just wasn’t much fun.

Basil fought off a number of generals and aristocrats during his early reign. If it wasn’t a rebellion, it was a coup. If it wasn’t that, it was a power-hungry relative from within his own dynasty. Basil didn’t hold back when it came to quelling these rebellions. Sword in hand, he took to the field and cut down his enemies with his own blade, even if those enemies were generals with far more experience than him. The rebellions no doubt affected Basil’s philosophies about ruling and lent him a ruthless outlook upon imperial life. Although he was cautious about forming alliances, he reached beyond Byzantium’s borders for help, and accepted the aid of Prince Vladimir of Kiev to shore up support from outside. In exchange for the prince’s help and his forces, Basil granted the prince his sister Anna’s hand in marriage. Unlike her mother’s marriages, Anna’s would last without any murder at all. Kiev’s would be one of the few alliances Basil ever agreed to. He never married, and he kept his family at a distance to protect himself from further distractions.

Basil knew he needed to ensure that no other aristocrats felt powerful enough to challenge him. To do so, he made an example of those who had rebelled against him. Next, he undercut the power of the aristocracy via a new tax plan that taxed the rich when the poor failed to pay their taxes. Further, he needed to reduce the size of nobles’ standing armies (all the better just in case some noble got the idea to seize power for himself). Normally, military service was the main form of tribute within in his territories. Basil allowed the people to instead pay in cold hard cash. The people, with more money than they had time, eagerly accepted this new offer.

Besides reclaiming the territories that Byzantine lost over the years, Basil wanted to get revenge on Bulgaria, a kingdom to the north of Byzantium that had been rising steadily in power. Early into his reign, he had challenged Samuel of Bulgaria and suffered a sound defeat. Bulgaria’s continued raids and expansion into Byzantine further wounded Basil’s pride. The conflict between Bulgaria and the Byzantine Empire lasted for years, neither country gaining enough ground for any of the battles to have a lasting effect. Basil learned from each battle, though, and finally, in 1014, Basil gained a decisive victory. Basil defeated his nemesis Samuel, who only narrowly avoided capture, and seized over 15,000 of Samuel’s men. Basil’s creative cruelty came into play after this victory. For every 100 of Samuel’s men, he blinded 99 of them. For the single lucky man out of those 100 who was only half-blinded, he let that man lead the rest of his cohort back to Bulgaria. It is from these wars that Basil earns his epithet, “the Bulgar Slayer.”

Basil became an effective general over the years, thanks to his ruthlessness and cunning. He claimed a large portion of the regions north of the Aegean and the Mediterranean Sea, practically doubling his Empire. His conquests brought pride to the Empire and earned him the trust of his military and the people. He held onto newly incorporated regions, including Bulgaria, thanks to his low taxes and in some cases, by allowing provinces to remain under the local rule.

Basil II died in December of 1025 AD. In his typical style, he requested to be buried in a small tomb outside of Constantinople. Unfortunately, Basil’s empire wouldn’t last. Subsequent rulers failed to hold the wealth and land that Basil gained during his fifty-year rule. 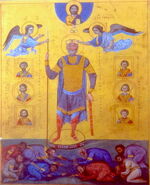