Science equal to 25% of the unit's cost when a non-civilian unit is created in this city.
May not be built in an Encampment district that already has a Stable.

The Basilikoi Paides is a unique building of the Macedonian civilization in Civilization VI. It is built in the Encampment district and replaces the Barracks.

The Basilikoi Paides provides all the same benefits as a Barracks, but it also affects Hetairoi and yields

Production cost when it is trained. That's already better than the

Science on offer from Campus Research Grants, aside from the lack of

Production towards them (the main one being Hong Kong's Suzerainty bonus), there are quite a lot of powerful boosts to military unit production. Here are some key examples:

For example, consider training a Quadrireme in a city with a Basilikoi Paides. If you slot Maritime Industries, grab God of the Forge, and recruit Themistocles, you'll have an additive 145%

Production bonus toward it, which equates to 145% more

Production. This Quadrireme will net you 73.5

Science - almost half of a Classical Era technology, and 61.25

Science output without too much investment in scientific infrastructure at all. The same

Production focus that this strategy requires is, incidentally, also needed to get a quick Spaceport and rapidly finish your space missions to win a Science Victory. Or you could use your advanced technology to dominate even faster- who could blame you?

Science upon units being produced. Purchasing, either with

Faith, does not count.

The basilikoi paides (roughly “royal page school”) was a long-held tradition in Macedon, but Philip II transformed it into a powerful tool to advance the needs of both king and state. Macedon’s noble sons, as well as those the king deemed worthy, were admitted to the basilikoi paides—a prestigious manner of dealing with royal hostages. Philip spared no expense in hiring the finest tutors, including renowned philosopher Aristotle, who likened the basilikoi paides to a “school for generals.”

Indeed, beyond the arts of war and administration, the young pages were taught to honor and obey the king, to protect him with their lives, and to serve Macedon’s interests above all others. This helped forge national bonds that superseded familial ties, in turn reducing chances of rebellion among the nobility. Graduates were afforded a position of prominence within the hetairoi (Companion cavalry). Alexander continued the tradition after his father’s death. 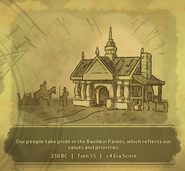