Must be built adjacent to City Center and a source of fresh water.

Wikipedia has a page called:
Thermae

The Bath is a unique

District of the Roman civilization in Civilization VI. It replaces the Aqueduct district and must be built adjacent to both the City Center and a River, Lake, Oasis, or Mountain.

Production cost provide a great advantage to grow larger cities before the Sewer and Neighborhood are available. That means Roman cities with a Bath can support 2 more

Citizens than those of other civs with an Aqueduct. It's wise to found cities near sources of fresh water and build the Bath when it becomes available, or at least place it soon to avoid the increase to

Production cost over time. When combined with Rome's and Trajan's unique abilities and the Legion, the Bath allows the Romans to claim more territory and build larger cities more quickly and safely than other civs.

In old Rome, the thermae were large bath complexes; while many Roman villas and palaces had private, heated baths, the thermae were public, open to all harried, dirty citizens who needed to relax and get clean. Although layout varied greatly from Roman city to Roman city, in general each had an atrium for relaxation and exercise, a caldarium (hot bath), a tepidarium (warm bath), a frigidarium (cool bath), as well as apodyterium (dressing room) and the like. The really nice ones also had a sudatorium (moist steam bath) and laconium (dry steam bath). The women's baths were almost as elaborate, and more highly decorated with murals and mosaics. After a long day at the Colosseum watching the slaughter, there must have been nothing as luxurious as a visit to the local thermae. 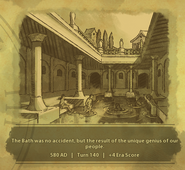