Melee unit of the Ancient era

Unique siege unit of the Hunnic civilization. Replaces the Spearman.

The Battering Ram is one of the most interesting additions to Civilization V in the Gods & Kings expansion. It replaces the Spearman unit and acts as a melee siege weapon, more powerful against cities than the Catapult and available earlier.

The Huns are the only civilization that possesses a siege weapon during the Ancient Era, which makes them terrific city rushers. The Battering Ram is, along with the Giant Death Robot, the only unit that can hope to defeat a well-defended city of its era without support - at this stage of the game, two attacks with a single Battering Ram often reduce city defenses to almost zero, allowing for blitz-capture campaigns that could wipe out an entire civilization in 10-15 turns! You just need to calculate your moves in order to be able to bring the ram into position as quickly as possible, and avoid having it destroyed by enemy melee units. (Its Cover I ability protects it somewhat from city attacks, and can easily be upgraded to Cover II with the Barracks that Bronze Working also provides.)

The Battering Ram's devastating power against cities comes with a couple of drawbacks. It replaces the Spearman, which reduces the Huns' power against enemy cavalry in the early game. And of course, the ram can't attack units, since it is, in fact, a specialized weapon.

The Battering Ram upgrades straight to a Trebuchet, which means that the Huns are able to use it alongside Catapults throughout the Classical and early Medieval Eras. Also, the Cover I ability does transfer when it is upgraded.

The battering ram was a siege warfare device primarily utilized during the ancient era. Designed with a singular purpose in mind, battering rams were used to crash through the heavy wooden gates used during this period. Although there were varying shapes and forms found among the many battering ram designs, all shared the same general principle. Mounted on a cart or other wheeled platform, a heavy log or post was slung using chains or ropes. Soldiers manning the ram would then pull back on the log, releasing it with enough force to splinter the enemy's gate. Although the specific details surrounding the Huns implementation of this siege weapon are scarce, it is known that they successfully deployed battering rams against a number of major European cities during their conquest. 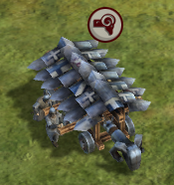