The Beacon can be built after the Decode Signal Project is completed. Once the Beacon is built, it must be activated. It costs 1000

Energy to activate, and "will consume all surplus

Once activated, it takes 30 turns to make contact. (This changes based on game speed)

The Contact Beacon must be built on a tile in range of the city constructing it. This tile becomes impassable to both military and civilian units.

Humanity's sociability made the void of the stars all the more awful. Despite searching from the earliest beginnings, despite a deep desire to connect with another intelligence, humanity found no equal. In the absence of actual peers humanity created a panoply of imaginary entities - reflections of their hopes and dreams. Humanity dreamed of beings from uplifting angels to the stuff of nightmares, but worse than any nightmarish alien was the prospect of being unique in the universe, of having no other intelligence with which to share the joys and the frustration of life. It was this existential loneliness that characterized the human approach to other intelligent life. Humanity could create artificial intelligence, but it was life of a different form, and not sensitive to our vagaries.

With the prospect of having found another living intelligence, humanity was torn. No longer alone, humanity was forced to confront the new Other. For many, the old predatory/prey and tribal instincts were too strong. Better to remain undetected, lest the new creatures prove to be a threat. But for a few, it represented the perfect opportunity for humanity to rouse itself and introduce itself to something else. For these few, the prospect of other souls with which to share the journey of life more than made up for the risk of annihilation; what was loneliness next to the awareness that annihilation of our species meant nothing to the uncaring stars?

The beacon itself neither taxed engineering sciences nor the technologies of the day. It had one purpose, to transmit a message that stated succinctly what species we were, and that we were open to further communication. Idealism dictated that many small steps must follow, but the initial contact must be unambiguous. To that end, only its size and the power requirements to create a signal of sufficient strength were the superlative parts of this Wonder. All else was merely another instantiation of human genius over the ages. Strife roiled around it, but the Beacon was calm and steady. Voices opposed its voice, but the Beacon drowned them out.

What must those poor, lonely souls have felt when the Beacon was first energized? Were those old instinctual fears born in the darkness of the Pleistocene still thundering in their heads? Did they feel some of the joy we have in this age, we who know our place among our fellow star-creatures? For we are no longer alone, we know the universe is full of life, and we go hand-in-hand together, which has made the journey all the easier. 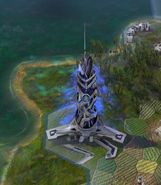