No Appeal adjacency bonus, but wonder tiles have +5 Appeal.

Grants "Mysterious Currents" ability to the entering naval unit and relocate it to a random Ocean tile on the other side of the map.


"There is, one knows not what sweet mystery about this sea, whose gently awful stirrings seem to speak of some hidden soul beneath … for here, millions of mixed shades and shadows, drowned dreams, somnambulisms, reveries; all that we call lives and souls, lie dreaming, dreaming, still."
– Herman Melville

The Bermuda Triangle is a three-tile passable Natural Wonder in Civilization VI that was added in the Maya & Gran Colombia Pack. Each Wonder tile provides +5

Movement, and are immediately teleported to an Ocean tile on the other side of the world (calculated as the location exactly half of the length and height of the map away from the point of entry). Embarked units can be teleported as well without gaining the extra

In Civilization VI: Rise and Fall, discovering the Bermuda Triangle grants +1 Era Score, or +3 Score if the player is the first to do so.

Due to the unpredictable nature of this Natural Wonder, there is not much strategy on how to play around it. The Mysterious Currents ability is cool, but refrain from triggering it on maps that contain many isolated bodies of water (most notably Seven Seas and Inland Sea) or have a high degree of randomness (like Shuffle, Fractal, and Splintered Fractal), since your naval units can easily get stuck in a body of Ocean that is surrounded by land. Most of the time, the extra

Movement bonus is not even worth the risk of making your naval units completely helpless.

Despite spawning only on Ocean tiles, the Bermuda Triangle will sometimes spawn on tiles close enough to the Coast to be worked by a nearby coastal city. Thus, if you are extremely lucky, it is possible to benefit from its huge

It started with reports about strange lights. It evolved into tales of missing and phantom-crew ships. Since the mid-19th century (and perhaps even earlier if Columbus’s journals are to be believed), ships and planes have been disappearing from the region known as the Bermuda Triangle. More than 50 ships and 20 planes allegedly have vanished within the triangle, never to be seen again. Although aliens are a popular theory for the mass disappearances of transportation and people, there are a few more mundane hypotheses to explain the triangle. Some scientists suggest that there are “air bombs” or microbursts that may have sunk the ships. Other scientists suggest giant “rogue waves” or magnetic shifts that lie about true north on compasses. In spite of the persistent legends and rumors, it is generally agreed that the frequency of disappearances and wrecks in the Bermuda Triangle aren’t any greater than any other section of well-traveled ocean.

The Bermuda Triangle, as seen in-game 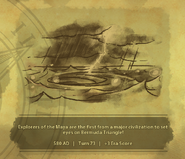