Movement if this unit starts in enemy territory. +10

Combat Strength when attacking and -5

Wikipedia has a page called:
Berserker

The Berserker is a unique melee unit of the Norwegian civilization in Civilization VI. It replaces the Man-At-Arms and is unlocked with Military Tactics.

In the Gathering Storm expansion, the Berserker requires 10

In vanilla Civilization VI, the Berserker started out as one of the worst units and belonged to the weakest civilization. The buffs that it has since received have turned it into an absolute menace of Medieval warfare.

The Berserker's prowess peaked with the changes made to it in the April 2021 Update. It now replaces the Man-At-Arms, so it can be inexpensively upgraded from the Swordsman if Norway already has some. Its base

Combat Strength is now 48, and it receives an additional +10 bonus on offense. The strongest Medieval unit in the game is the Mandekalu Cavalry (with 55

Combat Strength), and the strongest standard unit of this era is the Knight (with 50

Combat Strength of 58 in the Medieval Era is enough to one-shot Crossbowmen and Trebuchets, and can deal significant damage to Knights. Additionally, the Berserker's defense penalty now applies only against melee attacks, which means Crossbowmen are no longer the bane of Berserkers - only units that can make melee attacks have an advantage when attacking them, and the Knight is the only Medieval melee attacker whose

Combat Strength is high enough to compete with a Berserker. Berserkers, however, have the same

Movement as Knights when starting their turn in enemy territory, so they have nothing to fear as long as they can either avoid or overwhelm the Knights.

For these reasons, the Berserker is designed for one thing only: going on the offensive. Norway's civilization ability allows it to quickly traverse the seas and reach enemy settlements on other continents. With 4

Combat Strength of 58 when launching attacks there, it can do great damage to most units and unfortified cities of the Medieval Era while laying waste to every

District and tile improvement in its path.

According to a number of Old Norse sources, the berserkers (Ulfhednir or “Odin’s special warriors”) were Vikings who fought in “an uncontrollable, trance-like fury.” Other sagas note they forsook armor and went into battle bare-chested wearing wolf pelts, and were “mad as hounds, bit their shields … they slew men but neither fire nor iron had effect upon them.” Pretty impressive, even to the other fun-loving Norsemen. King Harald Fairhair supposedly used them as shock troops in the front ranks of his army c. 800 AD, and other Norse kings kept some as royal bodyguards, depending on their fierce reputation to keep the unruly in line. As the pious Christians said, “From the fury of the Norsemen, good Lord, deliver us.” 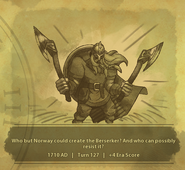 Historic Moment for building the Berserker