Wikipedia has a page called:
Bireme

The Bireme is a unique naval melee unit of the Phoenician civilization in Civilization VI: Gathering Storm. It replaces the Galley.

Since the Galley (or overall, any naval melee units in Civilization VI that are not under Harald Hardrada) has a really limited scope of usage in battle, the Bireme, which is a version of the Galley with improved stats, also serves mostly the same purpose: defending and scouting. If you are playing on a water-dominated map where there are several cities whose City Centers are adjacent to multiple Coast tiles (at least 2, ideally 3 or more), you can wage an all-out war just by using a group of Biremes themselves with little resistance thrown back at you, due to the Bireme's improved stats compared to the regular Galley. Otherwise, the only offensive purpose this unit can serve is occasionally plundering some

Trade Routes, which does not happen often and you surely do not want to cause a ton of

Grievances just for that.

Similarly to the Mandekalu Cavalry, the Bireme can protect Phoenician Traders on water, but it is unrealistic to be able to move this unit around to follow the

Trade Routes, especially considering the "legion" of cities Phoenicia will have, their discounted unique Harbor, the Cothon, and even more

Trade Routes from the Government Plaza. It is a mechanic that is just "there" without any practical implications.

A bireme is a rowed vessel with two banks of oars for rowers arranged in upper and lower decks and armed with a bow ram. The Phoenicians were the foremost shipbuilders of the ancient world and are generally credited by most archaeologists and historians with creating the bireme design, even though the word “bireme” is Latin. The Phoenicians were also perfectly willing to build warships for anyone with ready cash, whether the Greek city-states, or the Persians, or any other Mediterranean power.

Naval engagements in the ancient world consisted of trying to run down the other side's ships with a bronze-wrapped bow ram while avoiding being rammed in turn, or getting entangled in a sinking ship and being dragged to a watery doom. Ancient sources use adjectives like “chaotic” and “frenzied” and “terrifying” to describe these naval battles, which seems entirely justified. Archaeological evidence attests to a common practice of painting eyes on the bows of many ships to ward off evil. 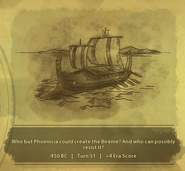 Historic Moment for building the Bireme
Community content is available under CC-BY-SA unless otherwise noted.
Advertisement