The leader Fielding (Economist) generates 50 credits per city each turn.

Suzanne Fielding was the eldest of three siblings, all daughters, born on the Texas Gulf Coast to a Mexican-born mother and an African-American father. Her father was the owner of three hardware stores in the region; Suzanne joined her father in running the business as a teenager. Accepting a scholarship to Louisiana State University, she graduated with honors and a double-major in economics and accounting. Driven by a desire to help reclaim coastal lands lost to the rising sea level in her home states, she was hired by the relatively new American Reclamation Corporation (ARC) to an entry-level position. Both meticulous and daring, and surprisingly adept at corporate politics, Fielding rose steadily through the ARC accounting division until, within 15 years, she was heading several operations simultaneously as operations manager.

When ARC CEO Michael Moderski signed the Trans-Mississippi Recovery Initiative, he personally asked Fielding to oversee the governmental resource coordination, to which she turned her considerable acumen. It was Fielding who caught the accounting chicanery which led to the FBI's Operation Riverboat and subsequent political fallout. Guiding the government to continue funding during the roiling controversy that followed, Fielding also kept the Initiative on track and on time, such that when Modersky stepped down as CEO, Fielding (who had since been elevated to CFO) was the logical choice for CEO. Sidestepping the Board of Directors, Fielding's appeal to the shareholders enabled her to hold both the CEO and CFO positions for ARC, making her the most powerful woman in the most powerful corporation in the world.

With Fielding at the helm, ARC turned from retail and manufacturing to financial and other services. She used the balance sheet and financial weight of ARC as a massive lever, engineering a series of shifts on Old Wall Street to unseat banks and exchanges. As ARC's capital reserves blossomed, many wondered what Fielding would do next. Few expected that she would announce ARC pursuing its own private Seeding venture, drawing on its vast engineering and manufacturing resources, and gaining a waiver from the government to conduct private space operations. The biggest surprise was when Fielding announced she would personally lead the first such expedition. With enough money to buy the world, the woman who led ARC found more meaning in starting over with a new planet.

Everything has gone according to plan. The colony is mine to control. Who else could do what I do? Could lead with my skill? No one. ARC knows I‘m their greatest asset. The more responsibility they give me, the more invaluable I become.

They think this will be a challenge. They don’t realize Economics is nothing more than Sociology followed through to its logical conclusion. If you understand the various factors which define people and their desires, you can be prepared to give them what they want. Once you know that, starting from scratch is easy. I will lead this colony to great riches, and ARC will profit, once I have my share.

I tell them this is for the greater good. They think I mean the greater good of Earth and humanity. I don’t. We are the ones being launched into space. The ones who will toil against the unknown. We are risking everything. If that risk pays off, humanity will survive, but we will reap the rewards.

I want more – Responsibility, power, wealth. All of it. If you think I’m greedy, then you don’t understand ambition. Ambition isn’t a character flaw. It’s the means by which I envision the future and then bring it into being. I will make the most of my existence. Those who help me can only prosper.

I will start from scratch on this new planet, but I have done so successfully before. When I was just a girl, I helped my father run his business. Economics has never baffled me, as it has so many others. Such principles just make sense to me. I will lead my colony to great riches, and ARC will profit, once I have my share.

"Fielding Aims toward the Skies as ARC Skyrockets"

One would think that there are no new worlds for the CEO / CFO of American Reclamation Corporation (NASDAQ: ARCZ) to conquer, but Suzanne Marjorie Fielding would tell you otherwise. I was recently granted a brief interview with arguably one of the most powerful people in the world after the latest earnings call. Everything was fair game – including "Operation Riverboat," the Seeding venture and what everyone is talking about these days: deep space travel. This is our conversation in its entirety.

The Journal: Today’s message to the shareholders was long on ARC’s current practices here on Earth and broadly talked about a vision for the future beyond Earth. How do you see things going based on your time with ARC so far?

Fielding: When I started at American Reclamation Corporation, it was to help reclaim coastal lands as part of the ARC’s Trans-Mississippi Recovery Initiative. My family was a big factor in that. I grew up on the Texas side of the Gulf coast. My father was a small business owner – he owned three hardware stores - and he taught me that diligence, hard work and attention to detail are what matter most. ARC has always stood for those values, as we have pulled ourselves past the Great Mistake. Knowing that ARC creates real solutions to global problems has been a major motivating force in my time here.

I’ve come a long way from that idealistic intern fresh out of LSU. Not only does ARC have the technical knowhow, production and infrastructure to work on the biggest global issues challenging everyone, we are now more financially sound than ever before. Ask any CIO that I’ve talked to today – go on, there’s about 190 of them to choose from – all agree that our direction is clear. We are leveraging our capital reserves to participate in Seeding ventures. And while we still hold a firm belief for everything ARC can accomplish here on Earth, we also have our eye on the stars.

Clearly, creating a financial arm for the Seeding venture has been a huge win for ARC so far. As you just alluded to, though, deep space travel is now a reality. Will that take your company's mission into space?

Everything ARC has done is consistent with its mission: To provide global solutions for complex global problems. ARC can move mountains and hold back the ocean, and we have built the physical and financial tools we need to serve our mission and our customers. Our recent developments on the finance side are an investment in the tools to continue this mission.

That isn't really answering the question. Will ARC refocus on space travel versus continuing to develop technologies here on Earth?

With deep space travel now a practical reality, keeping an eye on new markets both on Earth and light years away is obvious. We’re just following in the footsteps of the visionaries and business pioneers that have come before us like Musk, Branson and Cochrane who established the first private footholds in space 200 years ago. Here at ARC, we intend to build and execute our own Seeding ventures, from launch to landing. The Seeding represents a huge number of open markets and unmet needs in services and products, and I intend ARC to be in on the ground floor. If that means terraforming worlds to fit our needs, ARC is uniquely qualified to lead the human race into the future.

To that point, do you feel that ARC's primary mission is unsustainable here on earth?

Absolutely not. This is perfectly consistent with our overall, global mission. We are unique in that ARC can do things to make people’s lives better that no entity, private or public, can do. ARC will be in space, and ARC will be on Earth, and in both places we’ll be at the cutting edge.

Our readers are curious - ARC is doing well now, no doubt, but there was obviously a rough period not so long ago. Are you able to elaborate on your role in the FBI’s "Operation Riverboat"?

I’ve never withheld anything about my involvement with the FBI’s investigations, but you’re focusing on the actions of a few bad apples over a decade ago. A few staff in one regional office were found accountable and were punished, and I don’t need to point out to you that neither ARC’s directorial team nor its board were ever found to be involved or even liable for what occurred there. The system worked in this case, and ARC’s cooperation with the FBI was praised by the Attorney General’s office.

I’ll also remind you that any discussion into the exact nature of what happened touches on proprietary information and practices of the ARC and you would be found liable for discussing them without our explicit permission.

Fine, I understand. Are there any limitations or provisos on the space rights that the US government gave you?

There are some token limitations which really have no concrete effect on our plans or capabilities. I think these represent empty gestures from a government that fails to understand the value of what private enterprise can do in the colonization industry. If Congress says we can’t use the American flag on our spacecraft, I can assure you that a few grams of paint will not affect ARC’s success.

Who do you think is fit to lead a deep space mission on behalf of ARC? Would you want to be involved?

Leadership in this new era is going to be defined by an ability to maintain a clear vision of the larger goals of an organization while still focusing on the details of making the specific mission a success. Our Human Resource division, in conjunction with myself, our board, and our executives, will be creating a system for identifying those leaders of tomorrow. Personally speaking, I value people who can pull their weight. There's no room for playwrights or pedagogues in my world. I've never been the religious sort, so I'm not looking to convert the locals, either.

Are you at all concerned about the trip?

No. There are risks, but we at ARC are very good at risk mitigation.

You’ve spoken publically about a day when we could harvest and properly colonize the surface of planets light years away. Now that the time is upon us...are we ready?

We have to be ready. The American story has been one of the success of our private enterprises, and ARC is the foremost among these. We are the inheritors of a four-century tradition of liberty and property, and the legacy of Western civilization’s prosperity. ARC will do its part to bring that tradition into the future. 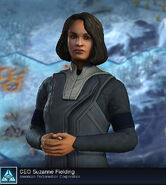