The Canal is a

District in Civilization VI: Gathering Storm that provides passage from a body of water to a City Center or another body of water. It requires Steam Power (or Masonry for Qin Shi Huang).

The Canal must be built on flat land with a Coast or Lake tile on one side, and either a City Center or another body of water on the other. A single canal passage may go either straight, or bend 60 degrees; three-way canals are not allowed.

Canals have long been seen as very valuable both in-game and in real life, but their first appearance in the Civilization franchise as a district rather than an improvement can make it hard for players to find a situation in which Canals are worth building. Even though it does not count towards a city's

Population limit, Canals do not provide

Housing nor any other yields, and are also more expensive to construct than regular districts. The only very situational "yields" you can get out of Canals are

Be sure to take advantage of the adjacency bonus that canals provide to Industrial Zones whenever possible.

A secondary, often overlooked effect of building a Canal to/from a City Center is that the city will get the ability to construct ships (if it doesn't have it already). Of course, for this to be possible, the City Center has to be within one tile of a seacoast, in which case you will be better off constructing a Harbor. The only case a Canal will be preferable is if you have reached the

Population limit (from which Canals, not being specialty districts, are exempt).

Since a Canal's main usage is to create a smooth flow between land and sea within your empire, how useful it will be is heavily dependent on the map type. Canals will be the most useful on maps that have a balanced mix between land and sea, most notably Fractal and Shuffle maps since these often contain bodies of water isolated within lands, or bodies of water separated by a long stretch of land that will require many turns of sailing to get from one to another. Canals can easily be omitted on land-dominated maps (e.g. Pangaea, Continents, and Inland Sea) or water-dominated maps (e.g. Archipelago and Island Plates), on which either naval units don't matter much or bodies of water are readily connected.

Note that construction of Canals and Dams can be sped up by Military Engineers, so remember to use them if you have to build these districts.

Be warned that if there are multiple possible connection points to your canal (city, lake, coast), you will not be able to choose which it will lead to.

It is much easier to move heavy, bulky goods like grain, minerals, or animals by water than it is by land. Unfortunately, nature does not always provide waterways where a waterway would be most convenient. Fortunately, human beings invented shovels some time ago. A canal is an artificial waterway created to facilitate the transfer of goods by boat. This differentiates them from aqueducts, which are merely used to move the water itself.

Some impressive canals were constructed in antiquity. The Persian King Darius ordered a canal cut from the Nile River to the Red Sea (Egypt was a vassal of the Achaemenid Persians at the time). The Roman Empire built canals to support the urban centers throughout their empire. Many canals were cut in China, beginning in the 3rd Century BCE, and culminating with the immense Grand Canal. The Grand Canal is the largest man-made water in the world, at nearly 1,100 miles (1,800 km) first built in the 6th Century CE and developed for the next 500 years.

Modern canals are monumental feats of engineering but have extracted an immense toll in construction. The Suez Canal, which connects the Mediterranean Sea to the Red Sea, took a decade to build at an immense cost of lives. The construction of the Panama Canal between the Atlantic and Pacific Oceans was even more costly in terms of lives and time and fortune, as workers toiled to level mountains in the face of tropical heat and diseases. These canals have also had unexpected impacts on ecosystems, enabling the unintentional transportation of invasive species from one part of the world to another. 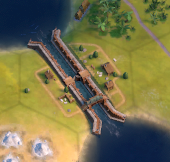