Wikipedia has a page called:
Caroleans

The Carolean is a unique anti-cavalry unit of the Swedish civilization in Civilization VI: Gathering Storm. It replaces the Pike and Shot.

The Carolean can be equally strong whether on defense or when attacking (though nowhere near as good as its Civilization V counterpart). It is a good idea to prepare for the use of this unit early by training Spearmen or Pikemen, preferably at an Encampment containing a Barracks, and leveling them up to earn the Redeploy

Promotion, which will increase both their strength and mobility when they upgrade to Caroleans. Other abilities which increase the

Movement rate of units should also be put to use, such as the Logistics policy card (available with Mercantilism) and Great Generals.

The Carolean is, however, far from invincible, especially if overextended. Musketmen are entirely capable of standing up against them due to their bonus against anti-cavalry units. To alleviate this, Caroleans should be backed up by some kind of ranged units, for which they can also provide protection from enemy cavalry. Swedish players should also pay attention to terrain on the battlefield and how many

Combat Strength due to expending

Movement points. This is necessary due to the fact that by default it doesn't quite have the mobility of its previous incarnation; for instance it doesn't have the old March promotion, generally forcing it to either use

Movement points to pillage or else forgo movement altogether and hold in place if it hasn't just leveled up in combat, in order to heal.

Keep in mind that Roads benefit the Caroleans a lot since

Movement points left always get rounded up when calculating for

Movement points left can still grant your unit a +3

Combat Strength does apply on defense, if the unit didn't attack last turn and didn't use all of its

Movement (if it attacked the turn before, its

Movement would drop to 0, resulting in no extra

The Caroleans were a new class of soldiers created by the military reforms of Sweden's kings Charles XI and XII. First employed during the Great Northern War, they were distinctive in that they employed shock tactics at a time when most armies used far simpler and less energetic maneuvers in formation. Their tactical innovations they were highly effective against their numerous enemies.

The Caroleans used a system called Gå–På—literally “go on”—which is best described as a coordinated effort by the entire battalion to close with the enemy and then hit them as hard as possible in one powerful punch. A Carolean battalion would be armed with a mix of pikes, swords, and muskets with bayonets. They would advance at a jog to within a few dozen meters of the enemy line, pause long enough to fire their muskets once or twice (Swedish muskets were somewhat heavier than those of their rivals), and then charge the enemy while he reloaded. Most armies used the pike to protect the infantry from cavalry attack. The Caroleans used them on the attack because sometimes a bayonet simply wasn't long enough.

At the dawn of the 18th Century, these were aggressive, revolutionary tactics. In general, the idea with infantry warfare at the time was to force the other side to retreat, usually by breaking the coherency of the line. Most armies' infantry stood about 100 meters apart and blast away until either the entire battlefield was obscured with smoke, or one side broke morale and fled. The aggressive Caroleans would advance intact through the initial enemy fire, return a higher volume of counterfire, accept the second enemy volley, and then proceed straight to the bayonetting part. Most of the enemies of Sweden preferred to skip the bayonetting altogether, and would break prior to contact with the Caroleans. This is a rational response to a charge by angry, motivated, well-trained Swedes. 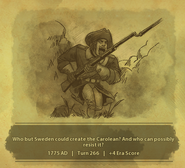 Historic Moment for building the Carolean