Culture for each adjacent wonder, increasing to +2

Gold if built on a River.
Provides

Wikipedia has a page called:
Château

The Château is a unique tile improvement of the French civilization in Civilization VI. It must be built adjacent to a Bonus or a Luxury Resource.

The Château has improved greatly since the April 2021 Update but still manages to be somewhat underwhelming as a unique improvement. It now functions similarly to the Sphinx: both provide

Tourism, and Appeal bonuses, can be built on most terrain (including Floodplains), can't be built adjacent to an identical improvement, and get bonuses from adjacent wonders. The Château, however, is unlocked later than the Sphinx, provides 1 less Appeal in Gathering Storm, provides

Faith, and has resource-adjacency restriction, but has multiple wonder-adjacency bonus like a Theater Square and provides more

Tourism, which works better towards a Cultural Victory. It is worth building on any tile with both a resource and either a wonder or river, but it is certainly not strong enough to win a game on its own - you will need to focus on France's other bonuses for that.

If one must ask, one cannot afford it. A château is a manor house or country home of landed gentry, usually without fortifications. In the Middle Ages, a château was largely self-sufficient, being supported by the lord's demesne (hereditary lands). In the 1600s, the wealthy and aristocratic French lords dotted the countryside with elegant, luxuriant, architecturally refined mansions such as the Château de Maisons. But many of these stately homes were burned during peasant revolts and populist revolutions. But a few remain as tourist attractions. Today, the term château is loosely used; for instance, it is common for any winery or inn, no matter how humble, to prefix its name with "Château." 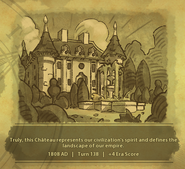 Historic Moment for building the Château