Can declare a War of Territorial Expansion with Military Training, instead of Mobilization. +2

Combat Strength for all units for the next 10 turns after declaring a War of Territorial Expansion.


"It is not enough to lead your people. Rather, you must lead as though you are your people."

Chandragupta Maurya (340 – 293 BC) was the founder of the Maurya Empire in ancient India, over which he reigned from 321 to 297 BC, when he abdicated to become a Jain monk. He leads the Indians in Civilization VI: Rise and Fall.

Chandragupta represents a less peaceful side of India, not afraid to be on the offense, expanding its borders into foreign lands.

Trust your ambition, Chandragupta, for it led you to unify all of India. Unleash war elephants upon any rival who curses your name, proud Mauryan king. Once you reclaim the land for your people, your stepwells shall see it flourish. May the borders of your empire expand forever.

Chandragupta's unique agenda is Maurya Empire. He wants to expand his empire and dislikes civilizations that have cities near his borders.

His leader ability is Arthashastra. He can declare a War of Territorial Expansion after discovering Military Training, and receives +2

Combat Strength for the first 10 turns after doing so.

Early access to the Territorial Expansion casus belli is Chandragupta's main advantage, so completing the Military Training civic is essential before mounting your attacks against your foreign neighbors. Preparedness is key in order to truly take advantage of his Arthashastra ability, crushing your foes swiftly with superior strength and faster movement. India's religious strengths should not be ignored, as conquering cities with other dominant religions makes it easier to spread those religions throughout his empire and taking advantage of the follower beliefs they provide.

Chandragupta is voiced by Sahil Vaidya. He speaks Pali, but the language is poorly translated. He also refers to India as Jambudvipa and uses some very distinctive Bengali pronunciations, such as "durattho" as the word for "distance" and ng for the accusative m at the end of a word.

Delegation: Our delegation brings many gifts. Drink all the spiced buttermilk you desire! We can always send more.

Accepts Player's Delegation: I quite enjoyed hosting your delegation. They gave me much to consider about our mutual future.

Refuses Player's Delegation: Though I would be delighted to meet your delegation, I am occupied elsewhere. Another time!

Accepts Player's Declaration of Friendship: Truly, India has long thought the same of your people. To declare so publicly is a privilege.

Rejects Player's Declaration of Friendship: My people do not share my enthusiasm for our friendship. But they may warm to you, one day.

Requests Declaration of Friendship: India thinks highly of your people. With your permission, I will declare our mutual friendship to all.

Player Accepts Declaration of Friendship: I can respect that.

Trade Deal Rejected: No. India would not benefit.

Denounced by Player: Though I ignore your cruel words, India will long remember them.

Denounces Player: You are an embarrassment to your people! You speak with two mouths, neither of them pleasant.

Invitation to Capital: We should speak of our capitals. Determine just how far we are from one another.

Invitation to City: You travel near Indian territory. Why not visit and relax at our grand stepwells?

Rare is the conqueror whose name spans millennia. Rarer still is the strategist who is equally capable on the battlefield and the political arena. Rarest is the ruler who would willingly give away an empire. Of all three, there is only Chandragupta Maurya.

Born sometime in the 3rd Century BCE in what was the Magadha region of India, Chandragupta’s early life remains somewhat of a mystery. Though some accounts speak of his connection to a family with a noble warrior tradition, conflicting Greek accounts claimed he was born a commoner. Despite this confusion, Chandragupta quickly earned a reputation as a clever and charismatic man, so much so that the great Chanakya decided to mentor him. With support and advice of the legendary politician and philosopher, Chandragupta received a crash course in politics, the arts, and military tactics.

Chanakya’s education was all for a singular purpose: he hoped his pupil could challenge the Nanda dynasty, a government widely perceived as corrupt. Chandragupta proved worthy of his tutor’s confidence, for he soon raised an army. By 322 BCE he overthrew the Nanda, installed himself as ruler of the kingdom of Magadha, and established the Mauryan dynasty.

Chandragupta was never one to settle. His eye soon turned to the lands ostensibly held by the mighty successor states of Macedon. Although Alexander the Great had perished before Chandragupta’s ascent to the throne, his conquest of the Indus valley ostensibly left the local satrapies under Macedon’s control. It seems Chandragupta took issue with this, for he restored the conquered lands under his banner, annexed the Punjab, and kept going until he pressed against the borders of Persia—and into the eastern flank of Seleucus I Nicator, basileus of the newly formed Seleucid Empire, and Companion to Alexander himself.

The Seleucid-Mauryan War, lasting from 305 to 303 BCE, would end with Seleucus ceding Macedon’s Indian satrapies to the Mauryan king. To show there were no hard feelings, and knowing Seleucus cared more about his successor state rivals to his west and south, Chandragupta gifted 500 war elephants to the basileus—a perfect present for nearly any occasion.

All told, Chandragupta’s empire extended all the way from modern day Afghanistan to southern India. Yet conquest was not Chandragupta’s only strength. Throughout his reign, Chandragupta proved himself a canny ruler who cared deeply for his people—or at the very least, canny enough to imply such care through actions. He built roads, irrigation systems, and expanded trade routes to improve the lives of his people. He was also clever enough to ensure the loyalty of his soldiers by providing them finery and servants in their garrisons.

Chandragupta met the sage Bhadrabahu near the end of his life, who taught him the precepts of Jainism, a religion promoting spiritual enlightenment and nonviolence through ascetic living. Following this new code, Chandragupta abdicated his throne to his son, Bindusara. He sought enlightenment, going on a pilgrimage to a cave in southern India. There he meditated until his death, fulfilling his ultimate goal of spiritual purity by giving up literally everything—his throne, kingdom, riches, and even food.

However, Chandragupta’s death was not the end of his dynasty. The Mauryan Empire would last another century. Inspired by his actions, Chandragupta’s successors—especially his grandson, Ashoka—followed his combined examples of expansion and spiritual enlightenment. 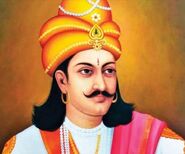