Culture equal to 75% of its tile's Appeal.
Provides

Wikipedia has a page called:
Chemamull

The Chemamull is a unique tile improvement of the Mapuche civilization in Civilization VI: Rise and Fall. It must be built on a tile with an Appeal of Breathtaking (4 or more).

The Chemamull is a great improvement if you focus on a Culture Victory, as it provides both

Tourism (with Flight) while giving a small boost to

Production. It has very high potential for

Tourism if you can fit many in the same city, but at the same time, its restrictive placement requirement means it needs more planning than any other improvements in the game.

In the early eras, whether or not you can put down Chemamull after unlocking it is almost entirely up to chance. Chemamull can only be built on a tile with Breathtaking (4+) Appeal, and all you can do at this point to increase the Appeal rating of a tile is to build Holy Sites, Theater Squares, or Entertainment Complexes, which is frankly not enough and maybe not the types of

Districts you want to put down everywhere. Since you have to rely on your surroundings to give you what you want, settling spots with often high Appeal are coastal, next to a lot of Mountains and Woods, and especially, next to natural wonders. Turn on the Appeal lens to mark locations where Chemamull can be built, and refrain from putting Appeal-reducing improvements and

Districts nearby, such as Industrial Zones, Mines and Quarries. Also, try to clear features that lower the Appeal of adjacent tiles, which are Rainforests and Marshes.

Later on, you can influence the Appeal rating of a tile by promoting Liang to the Parks and Recreation title, allowing you to build City Parks. City Parks grant 2 Appeal to adjacent tiles, so a tile next to 2 City Parks and not adjacent to any Appeal-lowering factor is guaranteed to be Breathtaking. Once you are done with building City Parks in a city, move Liang to the next one. City Parks will lose some

Culture when Liang is no longer in the city but keep their Appeal-boosting properties in full. Also, when Conservation is unlocked, you can plant Woods. Second-growth Woods grant 1 Appeal to adjacent tiles (except for the tile it is on). When combined with Reyna and her Forestry Management title (Gathering Storm only), each Woods tile grant 2 Appeal to adjacent tiles. Different from City Parks, Woods can be planted next to one another. Nevertheless, keep in mind that Chemamull cannot go on top of Woods, so it is better to treat Woods in this case like an improvement: keep them 1 tile apart from one another so one or two Chemamull can snug in between.

Similar to all other Appeal-focused civilization, the Eiffel Tower will greatly improve the utility of the Chemamull, and increases the number of tiles that Chemamull can be built on, as it gives 2 Appeal to all tiles in your empire. The Golden Gate Bridge gives 4 Appeal to the city it is in, but to find a place to build this wonder will never stop being a conundrum. Two

Great Engineers, so the Mapuche should seriously consider this wonder. The increased Appeal of the two

Great Engineer in the same city.

Culture yield of this improvement is dynamic: it will change if the Appeal of the tile changes. That means if later the Appeal rating of the tile drops below Breathtaking, the improvement will not be removed, but it will yield less

Culture of the Chemamull is always equal to 75% of the Appeal rating, rounded down, and it is possible for a Chemamull to yield 0

The Mapuche erected great wooden tombstones to remember their dead. These chemamull are carved from a single log and placed beside a person’s tomb. These “people of wood” stand as tall as a person, crafted as recognizably male or female figures with arms crossed over their bodies.

The Mapuche built these wooden statues to protect the spirits of their loved ones. They believed each statue guarded its tomb and helped to reunite a spirit with its ancestors. 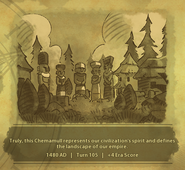 Historic Moment for building the Chemamull
Community content is available under CC-BY-SA unless otherwise noted.
Advertisement