Art of War
The Great General combat bonus is doubled, and their spawn rate is increased by 50%.

Wikipedia has a page called:
China

The Chinese are one of the more versatile civilizations, with two main paths to victory open to them.

Summarizing the rich history of China in several paragraphs is a daunting task indeed. China is a civilization spanning some six thousand years and comprising a large fraction of humanity. There is evidence of man's prehistoric ancestors living in China some two million years ago, and modern man has lived in the area for at least 18,000 years, possibly much longer.

Geographically, China can be divided into three main areas: the mountainous highlands of the west, the rugged south, and the eastern lowlands bordering the Yellow and East China Seas. Bisected by a number of major rivers, the incredibly fertile lowlands have been the center of power in China, and whoever controls that area controls Western Asia.

The Xia Dynasty is the earliest known centralized political entity in China. While the specific dates of the dynasty remain open to debate, many reputable scholars agree that the Xia existed from around 2000 BC to 1600 BC. The Xia did not control all of China; their power was largely centered in northern China, the area which would eventually become known as Manchuria. The Xia were eventually overtaken by the Shang, who lasted from around the 18th to the 12th century BC. The Shang were in turn ousted by the Zhou, who held power until around the 9th century BC. From the 9th century to the 2nd China suffered through the unending agony of near-constant civil war during the so-called Spring and Autumn period, which in turn was followed by the Warring States period. Eventually, in the second century BC, the Qin Dynasty conquered its rivals and established the first truly unified Chinese state. Their successors, the Han, introduced the office of the Emperor, the single leader who would rule all of China.

Over the succeeding centuries China would be ruled by the Tang and the Song dynasties. In 1271 AD the country would be conquered by the Mongol leader Kublai Khan, who would begin his own dynasty, known as the Yuan. A century later, the Yuan would be overthrown and the Ming dynasty would gain power, lasting until the 16th century AD. The Qing replaced the Ming, ruling until 1912 AD, when the Republic of China was established. The Republic lasted some fifty years, until it was overtaken by the People's Republic of China in 1949. As of this writing, the People's Republic remains China's current ruler.

A creative and innovative people, China has given the world some of the most important inventions in history, including paper, gunpowder, the compass, and movable type. (This section is mandatory whenever Chinese history is discussed, in case you were wondering. It's a law.)

China and the World[]

Throughout much of its history China has remained an insular and isolated civilization, largely ignoring - and ignored by - the rest of the world. This was not difficult, as for many centuries China long held a distinct technological and military edge over any and all external foes. And any threats it could not defeat militarily (such as the Mongols, who conquered China in 1271), it simply absorbed into its own dominant culture.

This changed during the 18th and 19th centuries. By this period, the European powers and Japan had achieved a significant technological advantage over the Chinese. This edge, combined with vastly superior naval forces, better armaments, superior communications and advanced military tactics, allowed the foreign powers to dominate much of the rich Chinese coastal cities, where they could engage in extremely profitable business (including the infamous opium trade). The weak and corrupt Chinese central government was unable to oust the hated foreigners, who remained until most were driven out by the Japanese during and following World War II.

Emerging triumphant over the Nationalists shortly after World War II, the Communist government spent the subsequent fifty years consolidating power, modernizing infrastructure, and improving the lives and education of its vast population, a process which included a number of massive missteps, including the idiotic "Cultural Revolution" which did its best to destroy China's intellectuals. In the past 40 years China has emerged as a major world power, an economic behemoth which will soon dwarf all other economies including the once unstoppable United States.

China is not without its difficulties, however. Much of its energy is expended simply supporting its huge and growing population base. Pollution is becoming a major problem as more and more factories are built, and more and more automobiles are clogging the bigger cities. Tibet - which depending upon your point of view is either a captive nation or an integral part of China - remains an open wound and major political distraction for China. None of these are insurmountable, though, and China stands poised to dominate the 21st century.

The Great Wall of China is not visible from space, contrary to common belief - it's too narrow.

Fingerprinting was used in China as early as 700 A.D.

Ice cream was invented in China around 2000 BC: the Chinese packed milk and soft rice together in the snow to make the treat. Marco Polo took the recipes for ice cream and noodles back with him to Europe.

Three of the world's ten longest rivers have their sources in China, and a further three originate in Mongolia.

The world's largest billboard was 300 meters long and 45 meters high, overlooking the Yangtze River at Chongqing in southeast China. However, this area was so continuously foggy that no one advertised on it since 1998. It was recently torn down.

People have been drinking tea in China for over 1800 years. Chinese White Tea is little else than boiled water. 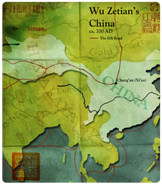