"The wicked king pursued the lovers Juan and Maria on his swiftest horse. As he overtook them, Maria flung down her ring, and at once rose up seven tall hills, and the king was slowed."
– Filipino Folk Tale

Discovering the Chocolate Hills grants +1 Era Score, or +3 Score if the player is the first to do so.

Since it has a vertical diamond shape, and given that it is a passable natural wonder which innately cannot be developed, the Chocolate Hills is a perfect spot for a National Park.

Since this is a passable Natural Wonder, it also counts as terrain features, which means it benefits from Reyna's Forestry Management and the Marae and also prevents Droughts.

Despite the name, there are no cacao trees atop these conical shaped hills, but instead they were named for their appearance in the dry season - resembling iconic chocolate treats. Located in the island of Bohol in the Philippines, the Chocolate Hills are a National Geographical Monument with a mysterious history. What caused the creation of these strangely shaped grassy mounds? The most commonly accepted theory is that they are weathered marine limestone, the result of thousands of years of erosion. Others have suggested that they came from coral reefs, thrust upward in a tectonic shift. Of course, there are also myths surrounding the creation of these (at least) 1268 hills. Perhaps they formed from the tears of a lonely giant who lost his mortal love. Regardless of how they were formed, these hills make for a uniquely gorgeous view.

The Chocolate Hills, as seen in-game 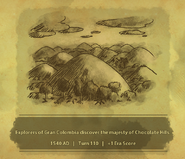 A civilization discovers the Chocolate Hills
Community content is available under CC-BY-SA unless otherwise noted.
Advertisement