No Man's Sky Update - The Loop

See the steam announcement for more 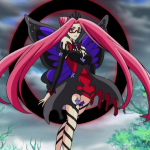