"Under the White Cliff's battlemented crown, Hushed to a depth of more than Sabbath peace."
– William Wordsworth

Wikipedia has a page called:
White Cliffs of Dover

The Cliffs of Dover are a two-tile passable Natural Wonder in Civilization VI. The wonder appears as a row of Cliffs, and covers two coastal Grassland or Plains tiles. Each Wonder tile provides 3

Food and +2 Appeal to adjacent tiles (increased to +4 appeal in Gathering Storm).

Like normal Cliffs, the Cliffs of Dover prevent land Units from embarking/disembarking between the land and coast.

In Civilization VI: Rise and Fall, discovering the Cliffs of Dover grants +1 Era Score, or +3 Score if the player is the first to do so.

The Cliffs of Dover wonder is made up of two land tiles, each with a yield of 3

Food. (The coast tiles are not part of the wonder.) Since Culture is often hard to generate early in the game, incorporating natural wonder tiles can provide a vital head start through the Civics tree.

Unfortunately, as with all natural wonders, the Cliffs of Dover tiles cannot be developed or improved, except by the use of a Preserve. Because of this, the Cliffs may be more of a hindrance than an asset later in the game, even more so than the various mountain and water-centric wonders! A natural wonder in the heart of a City can spoil adjacency bonuses for Farms and districts. In general, passable wonder tiles are significantly better than an unimproved tile of any kind, but are often less productive than an ordinary tile with an improvement or a district. An important caveat however is the Māori; Their Marae will affect any passable natural wonder, including the Cliffs, meaning these tiles will receive extra culture, faith and - later in the game -, tourism.

Note that the wonder tiles can be incorporated into National Parks - if a player wishes to found a Park, then it is often wise to incorporate as many wonder tiles as possible within a city.

The famed White Cliffs of Dover stand guard over the narrowest stretch of the English Channel facing the continent of Europe. Composed of chalk streaked with black flint, the cliffs reach a height of 110 meters (350 feet) in places. On a clear day, the cliffs can be seen from France. This natural wonder owes its fame as much to its symbolic value as its natural beauty, which may not last forever (either one); the cliff face is weathering away at about a centimeter a year, and occasionally large pieces break off … thus, visitors are urged to remain well back from the edge (it just wouldn’t do to have an Englishman fall off the White Cliffs of Dover).

The Cliffs of Dover intro cinematic

The Cliffs of Dover, as seen in-game 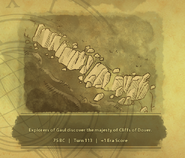 A civilization discovers the Cliffs of Dover
Community content is available under CC-BY-SA unless otherwise noted.
Advertisement