Faith for every 2 adjacent woods or rainforest.

Colossal Heads are a special tile improvement in Civilization VI. They can be built by a player that is the Suzerain of the La Venta city-state.

Improving tiles with Colossal Heads may be a wise strategy for those who are seeking a Religious Victory. With a large number of these improvements being worked, you will generate a lot of

In Gathering Storm, one single Colossal Head can provide up to 8

Tourism (as well as

Faith) after the Flight technology is researched, making it a helpful addition to any civilization seeking a Cultural Victory, especially those favoring dense forest or rainforest areas, such as Brazil, Kongo or Maori. The Kongolese most notably benefit from this improvement, since their

Faith generation (which in turn leads to Natural Parks and Rock Bands in pursuit of a Cultural Victory) is pretty low considering they cannot build Holy Sites.

The colossal “Olmec Heads,” 17 stone sculptures dating to before 900 BC, are the best known remnants (at least, by tourists) of the once flourishing Mesoamerican Olmec civilization. Carved from a single boulder and then transported many miles, each depicts the head and face of a mature man, likely that of a powerful Olmec ruler, or as some theories would have it, famous ball players (if so, not much has changed). The massive heads weigh between six (the smallest) and 50 tons (the largest, but unfinished), made from basalt from quarries in the Sierra de los Tuxtlas range near Veracruz. Given that the Olmec had no metal tools, the effort to scatter these sculptures across the countryside was immense … yet another instance of mankind’s desire to leave their mark on the world. 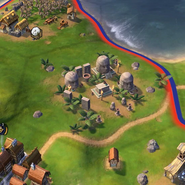