A unique type of

Great Person only available to Simón Bolívar. Each has unique abilities, including a passive effect, and a Retire effect.

Back to Great People

Wikipedia has a page called:
Libertadores

The Comandante General is a unique type of

Great Person available only to the Gran Colombian civilization (when led by Simón Bolívar) in Civilization VI. It cannot be trained or purchased, but is earned for free every time the game enters a new era.

Movement bonus on top of a +10

Combat Strength bonus as early as the Classical Era, on top of your existing

Movement bonus of your civilization.

By earning the first Comandante General at the start of the Classical Era, Gran Colombia will earn +4 Era Score, making it slightly easier to avoid a Dark Age going into the Medieval Era. However, for each subsequent Comandante General, you do not earn +2 Era Score like when you earn other

Great People, but they do grant +2 Era Score the first time a unit within their radius successfully scores a kill.

As an example of their daring, during the liberation of New Granada, Bolívar led his 3,000 troops through swollen rainy-season rivers and up the flanks of the icy Andes, a move that would be nearly suicidal for another general. But Bolívar came down from the heights, outflanking the Spanish and cutting off reinforcements. Bogotá – the Spanish colonial capital – fell just days later. 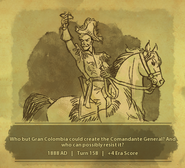