Melee unit of the Renaissance Era

Combat Strength when there is a Missionary, Inquisitor, Apostle or Guru within one hex. If this unit captures a city or is adjacent to a city when it is captured, the city will be converted to Spain's majority religion.

Wikipedia has a page called:
Conquistador

The Conquistador is a unique melee unit of the Spanish civilization in Civilization VI. It replaces the Musketman.

In the Gathering Storm expansion, the Conquistador requires 10

The Conquistador is a great way to push Spain's main agenda: Religious Victory through conquest. It is quite underrated as a unique unit, despite the potential for outstanding damage output. Thanks to Spain's religious fervors under Philip II, the Conquistador is one of the easiest unique unit to stack many layers of bonus

Combat Strength on. These are just a few of the most common ways to give additional

Combat Strength to your Conquistadors:

Great General, everything else is quite easy to get, which allows your Conquistadors to boast an absurd level of

Combat Strength that fares well one or two eras after it becomes available, and this unit already has a built-in 3 extra

Combat Strength over the standard Musketman. All of that costs only 10 extra

Regarding whether Crusade or Defender of the Faith is the better Enhancer belief, it depends a lot on your

Faith generation. Crusade undoubtedly allows city captures to go a lot faster, since another layer of 10

Combat Strength can make Conquistadors unstoppable. However, it is susceptible to enemy Inquisitors and it renders the conversion ability of Conquistadors worthless, since you have to establish the presence of your religion in the city before the capture. Crusade is recommended when your

Faith is good enough to purchase a lot of Apostles to bring along on a conquest, since they are the only religious unit that can effectively counteract enemy Inquisitors and stand their ground against them in theological combat, and Missionaries are too weak to be able to quickly and reliably convert a religious city to another religion. If your

Faith generation is lacking, Defender of the Faith is the better choice. You can cheaply purchase Missionaries or Inquisitors to bring along to combat, of course you will have to forgo a good chunk of

Combat Strength when trying to capture enemy cities, but they will be instantly converted to your religion, thanks to the Conquistador's ability. This will make it harder for the enemy to re-capture their own settlements, thanks to the newly gained 5 extra

Combat Strength. Holy Order is also a worthwhile Enhancer belief if you have low

Faith, but it is worse than Defender of the Faith, since Missionaries with 30% discount are roughly the same as a normal price Inquisitors anyway, and you don't have the extra

The ability to convert enemy cities into your religion can be redundant if you pick Crusade, but can be very useful otherwise since you can push closer to a Religious Victory without expending any

Faith. You can also print out Era Score very rapidly by converting foreign cities during a war, similar to how Byzantium works. If these cities have a Holy Site with buildings inside, they can also instantly purchase religious units of your religion to further support your army. Note that the Conquistador will convert captured cities into your majority religion, not your founded one. Therefore, if you do not have a majority religion in your empire, the Conquistador will convert captured cities into atheism (similar in function to an Inquisitor removing an alien religion), or if your majority religion is different from your founded one, that alien religion will be adopted instead.

Similar to other domination-oriented unique units, the sooner you unlock your Conquistador, the better. Try to train Men-At-Arms to upgrade them into Conquistadors. Mercenaries is an important civic to reach, since it provides Retinues and Professional Army, allowing you to upgrade your army at a discount in both

The Spanish conquistadores (“conquerors”) were the soldier-explorers who colonized the world for Spain from the 14th through the 18th centuries. With the end of the Reconquista in 1492 AD, there were a lot of veteran Spanish soldiers at loose ends; luckily, shortly thereafter the Spanish discovered a New World, just ripe for conquest and conversion to Christianity (the latter actually did motivate some). The conquistadors would spread across the Americas, Africa, Asia, and even Oceania, exploring, exploiting, and even settling down in places. Drawn primarily from the ranks of light horsemen, the combination of European tactics, weapons, mounts, and ruthlessness meant most of the natives had little chance of defeating the conquistadors … and that small chance only due to sheer numbers (provided enough of them were willing to die). There is no doubt that without the likes of Cortes, Pizarro, de Balboa, de Soto and others chasing fortune, there would have been no globe-spanning empire.

A Conquistador in game 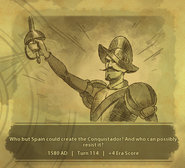 Historic Moment for building the Conquistador