Amenities from entertainment to parent city.

Amenities from the Aquarium and Aquatics Center buildings extend to cities whose City Centers are up to 9 tiles away from the district.
Allows the city to start the Carnival city project, which turns

The Copacabana is a unique

District of the Brazilian civilization in Civilization VI: Rise and Fall. It replaces the Water Park and must be built on a Coast or Lake tile adjacent to land.

The following buildings can be constructed in a Copacabana:

Districts. As the Water Park is generally much better than the Entertainment Complex, the Copacabana should be prioritized in every Brazilian city as soon as it is unlocked.

The Copacabana serves the same purpose for Brazil as its Street Carnival, providing

Amenities and a bevy of

Great Person points when they undertake its special Carnival project. It becomes available later in the game than the Street Carnival, but once it does, it makes a welcome addition to coastal or island cities that have yet to build an

This district also gives access to two different Projects - the special Brazilian Carnival and the default Bread and Circuses.

Because of how powerful this

District is, Brazil should always make a beeline for Natural History.

Justifiably one of the most famous beach neighborhoods in the world (and interestingly, named for a place in the highlands of Bolivia) Copacabana looms large in Brazilian identity domestically and around the world. Officially nestled between Fort Copacabana at the south end and Fort Duque de Caxias at the north end, it was a luxurious neighborhood for the elite of Rio de Janeiro for most of its history, with the Copacabana Palace Hotel as its biggest landmark. In the 1970s when the narrow beach was expanded and the area became a booming destination for sunbathers and tourists of all social classes. It has served as a massive venue for concerts, New Year’s Eve celebrations, and even a papal Mass. 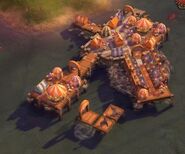 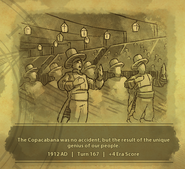 Historic Moment for building the Copacabana
Community content is available under CC-BY-SA unless otherwise noted.
Advertisement