Combat Strength when fighting in or adjacent to its home territory. Can move after attacking if

Wikipedia has a page called:
Cossacks

The Cossack is a unique light cavalry unit of the Russian civilization in Civilization VI. It replaces the Cavalry.

In the Gathering Storm expansion, the Cossack requires 10

When the power of the Russian civilization is considered, the Cossack is often overshadowed by the almighty Lavra, but that doesn't mean this is a weak unit. It is a decent, although largely underused, unit, because Russia gears towards a religious and cultural victory a lot more than a domination one, and defensive units, are more often than not, overlooked.

Production, Cossacks have 5 more base

Combat Strength than the Cavalry, not bad. Nonetheless, they truly shine on defense, as their

Combat Strength is raised to 72 if there is at least one Russian tile adjacent to them. For comparison, 72

Combat Strength is as high as Infantry, allowing Cossacks to stand their ground against invasions.

On offense, they do have bonuses that help them succeed in conquest. Back in Civilization V, all mounted and armored units had the ability to move after attacking, while in Civilization VI, only the Cossacks, sufficiently promoted recon units, and the Vietnamese Voi Chiến have it, giving them a powerful advantage in the Industrial Era. Being able to harry enemies with hit-and-run attacks means it is easier for a group of Cossacks to focus down an enemy by alternating their attacks. They are not exactly the best at taking cities, but thanks to their defensive bonus, they are good at defending newly captured ones. For this reason, support your Cossack army with sufficient siege power.

But again, you cannot view this unit in a vacuum. Russia, with their first pick of religion, can easily customize it with Crusade belief if they want to go on a full domination mode. Also, in the same vein as the aggressive Ethiopia playstyle, it shouldn't matter if the Cossack is not the best offensive unit. The Grand Master Chapel, Theocracy and huge

Faith influx coming from Lavras and appropriate policy cards allow you to crush any enemy just from using the sheer number advantage. If Ethiopia can pull it off with their inconsequential Oromo Cavalry, there is no reason Russia cannot with their much superior Cossacks, but of course, this purchasing strategy once again puts an emphasis on how powerful Russia's

Faith generation is thanks to their ability and the Lavra, but not on the Cossack itself.

The kazaki were members of semi-democratic, semi-nomadic, semi-militaristic communities along the steppe-shores of the Dnieper, Don, Ural, Volga and other rivers cutting across the Ukraine. It isn’t clear when these Slavs started settling in the region after the collapse of the Khazar kingdom, but it is likely after the Mongol tide receded, so perhaps late 13th Century AD. A mixture of horse barbarians and “civilized” peoples, by the 1600s the Cossacks were a loose confederation of tribes and independent communes. Internal politics notwithstanding – and the various Cossack hosts fought among themselves as much as against their neighbors – they became a force to be reckoned with, light cavalry par excellence. In time, early 17th Century or so, some of the hosts took service with the growing Russian kingdom to the north, providing a buffer against the Crimean Tatars and Ottomans to the south. The Cossacks would thereafter figure in every war the Russians fought, until virtually annihilated by Stalin following WW2. 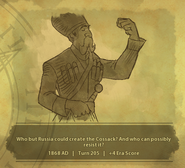 Historic Moment for building the Cossack