Gold from each adjacent coastal resource.

Gold from every 2 adjacent district tiles.
+2

Gold if adjacent to the City Center.

Must be built on Coast or Lake Terrain adjacent to land.

Production towards naval units and Settlers in this city
All wounded naval units in the city heal +100 HP per turn.

Wikipedia has a page called:
Cothon

The Cothon is a unique

District of the Phoenician civilization in Civilization VI: Gathering Storm. It replaces the Harbor and must be built on a Coast or Lake tile next to land.

The following buildings can be constructed in a Cothon:

The Cothon is an extremely powerful unique district, and nearly all of the game as Phoenicia revolves around this district. It should be the first district to be built whenever a new city is founded (maybe except for your original

Capital, where you can go Government Plaza and then Cothon, in order to build the Cothon much faster). This means Celestial Navigation must be rushed, so try to scout for a Natural Wonder, settle a city on the coast and improve 2 sea resources in order to trigger the

Eureka that lead to this technology, all of which are very simple for Phoenicians, considering their coastal starting bias.

The Loyalty bonus of the Phoenician civilization ability encourages coastal settlements, meaning every Cothon built most likely would benefit from the major adjacency bonus to its City Center. Taking into account the cheap price of unique

Districts, the high adjacency bonuses of these Cothons and the number of Settlers Phoenicia can churn out in the first few eras, Phoenicia is the best civilization to benefit from a Free Inquiry Golden Age Dedication, when every other civilizations either cannot have enough infrastructure to make it impactful or do not have

The highlight of this

District is that it provides 50% bonus

Production towards Settlers. With the Ancestral Hall and the Colonization policy card, the

Production can participate in training Settlers as well, 100%

Production bonus from the Cothon and Colonization card should be impactful enough. These cities (without Magnus) should have decent growth to make up for constant the

Population loss resulting from training Settlers en masse, but on the other hand, this is also a decent method to keep your

Population in check and make the most out of your

Food yields, since Phoenicia does not have any

Production bonus towards naval units of all classes, at any moment in the game. Their fleet, although cannot be as vexatious as Norwegian fleet early on, will have a much more lasting impact than any other naval civilization in the game, just from the fact that no one can compete with the speed Phoenicia can crank out these units. Not to mention, naval units can heal in one turn in a city with a Cothon, rendering any attempt at naval domination against Phoenicia fruitless and generally, foolish. This district also poses a threat to the Phoenician neighbors as their ships can be built in quick order and can be sent home to heal extremely quickly. These newly conquered cities may come with their own Harbors on water-dominated maps, which will then turn into new Cothons, making them new bases for shipbuilding and quick healing. Therefore, as long as map generation is in Phoenician favor, their ships can all heal in just one turn in a conquered city with a Cothon, allowing them to roll from conquest to conquest in a hurry.

The word “cothon” is Greek for “drinking vessel,” and describes the circular shape of the artificial harbors created by the Phoenicians. There are surviving examples of these today in Sicily, Tunisia, and Cyprus. The best-known example may have been the one at Carthage.

The cothon consisted of two sections: A long, rectangular outer harbor for merchant traffic, which led to a circular inner harbor for warships. The outer harbor's quays would have been busy places, and the cothon at Carthage was reputedly capable of supporting hundreds of ships at a time. Each night, the mouth of the harbor would have been secured with an iron chain for security.

The inner, military harbor, was a protected and secure facility to build, repair, and outfit the Phoenician naval vessels for war. The inner harbor had an artificial island at the center for the commanding admiral. The outer ring of the military harbor would have contained slipways for ships, as well as naval stores and material for the repair and construction of new ships. The ancient writer Appian describes the Carthaginian military harbor as ringed by Ionic columns, “giving it the appearance of a continuous portico to both the harbor and the island.”

The cothon was an integral part of the Phoenician dominance of the Mediterranean. Ships are expensive to build and maintain, and the construction of these specialized, sophisticated facilities demonstrate the Phoenician's commitment to ruling the seas.

Close up view of the Cothon 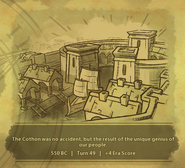 Historic Moment for building the Cothon
Community content is available under CC-BY-SA unless otherwise noted.
Advertisement