"Never again can I gaze upon the beauty spots of the Earth and enjoy them as being the finest thing I have ever seen. Crater Lake is above them all."
– Jack London

Crater Lake is a single-tile passable Natural Wonder in Civilization VI. Crater Lake appears as a Lake on Plains or Tundra tiles. Its tile provides 5

Science, instead of the normal yields from lake tiles. Crater Lake increases the Appeal of adjacent tiles by +2.

Movement penalty when they embark/disembark from Crater Lake's tile onto dry land.

In Civilization VI: Rise and Fall, discovering Crater Lake grants +1 Era Score, or +3 Score if the player is the first to do so.

Crater Lake's tile has a yield of 5

Science. Since faith is often hard to generate early in the game, founding a city next to the lake can provide a vital head start with founding an early Pantheon.

Like ordinary lake tiles, the yields of Crater Lake's tile can be increased using certain bonuses. If the wonder tile is owned by a city with a Lighthouse and Seaport, the yield of its tile will increase by 1

Production. The Suzerain bonus of the Auckland city-state further increases the tile yields by 1

Production, and by an additional 1

Culture will apply to any district built next to the Crater Lake.

Unfortunately, as with all natural wonders, the Crater Lake tile cannot be developed or improved. Crater Lake can interfere with district or farm adjacency bonuses, however it is small enough that this is usually not a major issue.

Crater Lake, called at times “Deep Blue Lake”, and “Majesty Lake,” is a sacred site to local Klamath groups, who historically attributed the lake to a battle between the sky god Skell and the underworld god Llao. Formed some 7700 years ago when the stratovolcano Mazama in the North American Cascade Range collapsed, Crater Lake is a deep caldera lake. Since no rivers flow into or out of the lake, the fresh waters there are the result of rain and snow; scientists estimate that the water is completely replaced only every 250 years. Not the best spot to refill a canteen when hiking the glorious Cascade trails. 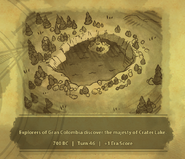