Ranged unit of the Medieval Era

Range of 1 and high combat strength.

The Crouching Tiger is a unique ranged unit of the Chinese civilization in Civilization VI.

The Crouching Tiger can never fully replace the Crossbowman, which is also unlocked by Machinery. Compared to its contemporary, it has the same

Production cheaper. While the Crossbowman's greater

Range gives it a huge advantage on offense, the Crouching Tiger is better suited for defense, especially when used in conjunction with the Great Wall.

Range, the Crouching Tiger exposes itself to retaliation each time it gets close enough to fire at an enemy, but placing it on a Great Wall segment gives it a +10

Promotion works especially well with a Crouching Tiger placed on a Great Wall segment, since it will gain 10

Combat Strength on both offense and defense. Another use for this unit is to put it in an Encampment, so you can enjoy its high

Ranged Strength without fear of retaliation. Nevertheless, if you time your attacks right, it's possible to move Crouching Tigers within range of enemy units and fire before they can react! 50

Ranged Strength will do decent damage to all Medieval Era units except Knights, especially if you've managed to accumulate some

Since the Crouching Tiger is a standalone unit, you cannot pre-build other units to upgrade into them, but its low

Production cost allows you to quickly train some of them if you're targeted for declarations of war, especially with Feudal Contract (which is unlocked with Feudalism, a civic China will always want to beeline). In the expansions, there shouldn't be any repercussions if you train one Crouching Tiger just for the Era Score, since it isn't vital to any Chinese strategies.

After the Chinese discovered gunpowder c. 9th Century AD, they used it just for fireworks and making pretty, colorful explosions. But eventually someone figured out it was pretty useful in warfare too, and soon enough flintlocks and cannon were all the rage in Asia. According to Dr. Yongxiang Lu, the little-known Chinese “Crouching Tiger” lay somewhere between a bombard and a cannon, one of the earliest uses of gunpowder in warfare. A crude device, it was basically an iron tube, sealed at one end, wrapped with thick ropes to reinforce it and with two short legs at the front to elevate the barrel slightly (so the shot didn’t plow up the ground instead of smashing the enemy). It is known that the Crouching Tiger saw action c. 1368 at the beginning of the Ming dynasty, and was still being used as late as 1592 against the Japanese in Korea. When fired, it is reported to have had a range of about 800 paces, which no doubt made the enemy very uncomfortable since it outranged anything else at the time. 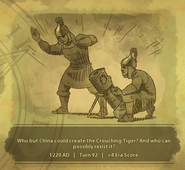