District in Civilization VI: Gathering Storm, dedicated to improving the comfort and safety of people living along a River. It must be built on a Floodplains tile and the River must traverse at least 2 adjacent sides of the future Dam tile.

The following buildings can be constructed in a Dam:

While an important defense (where available) for your riverside cities against floods and associated damage, Dams are vulnerable to less natural disasters, such as invading Barbarians and enemy soldiers pillaging them, as well as air attacks by Bombers and the like. Try to keep at least one strong military unit nearby (or even in the district), if possible backed up by fortifications and other defensive measures such as friendly air cover.

Remember, even in peacetime and with Barbarians kept safely far away, Dams are still open to hostile action. Spies can target your Dams in Breach Dam missions where they will attempt to damage (pillage) them, causing a Flood in any affected city and leaving it open to future flooding until its Dam district can be repaired. It may be advisable to have friendly Spies on counterspy duty in at least some of your cities that have a Dam district. Note that enemy Spies with the Satchel Charges promotion will have a much better chance of succeeding in breaching Dams, even if they are relatively low level. Also, Spies don't always need to target your Dams directly - for example, they can use Recruit Partisans to get rebels to devastate Dams (and other districts) for them, though this may not be quite as reliable as doing the job themselves.

However, come the Modern Era, Dam districts permit construction of a Hydroelectric Dam, the first and strongest renewable

Power source, which means essentially free power for this city: something not to be missed.

Don't forget the requirement for the same River to traverse at least two sides of a Dam's tile; it can make placement extra tricky when your city is placed near a junction of two Rivers.

Production. While rare, a city can build multiple Dams if there are multiple rivers, offering a chance to score more adjacency bonuses, but remember all buildings are city-unique, including Hydroelectric Dam.

A dam is an artificial barrier created across a moving waterway in order to regulate the flow of the waterway. Originally created to control flooding and create reservoirs, they have since been adapted to provide power directly (through the use of water wheels and turbines) or indirectly (through hydroelectric generation, which we admit also uses water wheels or turbines).

The oldest known dam in the world is Jawa Dam, which appears to have been built around 3000 BCE. Dams were built across the cradle rivers of civilizations: The Tigris, Euphrates, and Yangtze rivers and their tributaries all have dams associated with them. The Great Marib Dam in Yemen was built around 700 BCE, and was an immense, sophisticated stone dam with spillways and floodgates. The Romans built the first arch dams, which allowed for the creation of larger dams.

The largest dam reservoir in the world today belongs to Aswan High Dam across the Nile River, which effectively ended the annual flooding of the Nile River (this turned out to be a mixed blessing at best). China boasts three of the of top four tallest dams in the world, all taller than 285m, and all built for hydroelectric generation.

Dams require regular maintenance. Given the enormous water pressure exerted on a dam, they tend to fail dramatically when they become structurally unsound, leading to tragedy for the people living downstream. In addition, dams are prone to a buildup of sediment on their leading faces, which reduces the volume of the reservoir. Upstream changes to the course of a waterway may also cause a dam to be abandoned over time. 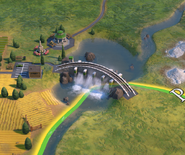 The City of Manaus has three Dams built.