Born to a Chinese mother and Cambodian father, Daoming Sochua was raised in the traditions of both cultures. She tested at genius levels at a very young age and progressed rapidly through the state-sponsored school systems for gifted children. She quickly surpassed her parents – who were both university professors in the sciences — and her bright siblings in her studies. Entering university in her early teens, she proved focused and motivated to dominate her older peers.

By the age of thirty, she held four PhDs in electrical engineering, nano-electronics, nuclear physics, and bubble fusion. Pioneering ground-breaking methods for extracting energy from sources heretofore thought exhausted, as well as deep-sea and off-world resources, Daoming Sochua was presented with numerous international awards before joining the Pan-Asian Cooperative’s Bureau of Scientific Revolution. She was specifically recruited by the Cooperative Space Agency for her experience with energy research and unconventional power systems. Daoming was brilliant, driven, and single-minded in her roles, whether as a researcher or administrator.

When she was appointed to head a number of innovative (and perhaps dangerous) projects undertaken by the Cooperative, she revealed a talent for administration. Motivated by the Seeding, she volunteered to head one of the missions to colonize other planets for Pan-Asia. At the time, she was in charge of research studies aimed at overcoming the Inflection Point, knowledge that would serve her in good stead in her new role. Throwing herself into her role as mission leader, Sochua brought her characteristic single-mindedness to decisions on the outfitting and launch of “her” colony, driving her crew and staff unrelentingly. Although not beloved by the colonists on the one-way trip, she was highly respected – which was all that Daoming Sochua expected or demanded.

While some looked to the stars and saw gods, I saw possibilities – Possibilities for a future that has finally come. We have explored the unknown sky and now will colonize the alien shore. I will lead my people to great success as the Pan-Asian Cooperative discovers its new role in the universe.

This will be my final sunset on Earth. Tomorrow, I will lead the Pan-Asian Cooperative into the Aether. We leave behind everything but our wits and machines, and yet I foresee a great and prosperous future awaiting us on new shores.

I have chosen to lead the Pan-Asian Cooperative of Earth to a new, alien world. What we establish there will be my colony and they will be my people. They know I demand nothing short of perfection. The secrets of our new planet will be ours and ours alone. I have no doubt that we will continue our tradition of success and rebuild towards a brighter future.

When we land, there will be much to do, if our colony is to be great. I am not intimidated by the work; I simply wish to be prepared. I wonder at the effects this new habitat will have on our production. Will our equipment work on the planet below? How many modifications must I make before our technology will suit the environment? I have spent much time questioning and theorizing. Now it is time to act.

On Earth, the Pan-Asian Cooperative was great. Out here, we will be better. With new challenges will come new ways to apply ourselves. We will find our niche and we will succeed. Nothing will stand in our way and I will be at the forefront, leading us to greatness.

Civilization: Beyond Earth - The Story Behind Pac Leader Daoming Sochua

Wu: (concluding remarks)...This demonstrates that deep space extraterrestrial settlement, while physically feasible, could only be accomplished through an unwise overinvestment of critical strategic materials. Materials, might I add, that are better utilized in mining nearby interstellar bodies.

Liang: This is to say nothing of the social costs of the project. It would be nearly impossible to maintain a proper social cohesion with the Cooperative given the delays of communication over the distances and without military oversight. Any colony that disconnected from Earth would easily slip into anarchy. I move that the recommendation of this panel be that all extrasolar colonization projects be frozen and a new committee be appointed to -

Sochua: Gentlemen, I must dissent.

Liang: Dissent? You would condone a breakdown in social order?

Wu: (Cutting off Liang) What dissent can you possibly raise? I have shown -

Sochua: You have shown that there is not enough titanium in our geographical reserves given a set of a priori assumptions about spaceflight, which I cannot help but describe as willfully conservative. By your calculations, each spacecraft would consume more materials in its construction than the PAC has used in its entire aerospace industry in the past three years. Beginning with bad assumptions you have gone on to draw specious conclusions.

Wu: I wouldn't expect some physicist to understand the complex logistical -

Sochua: I have four PhDs, and can handle some simple algebra. Let me show you.... here. (Pulling out a projection data pad) This is your report to the Cooperative Liberation Air Forces from six weeks ago. Your production estimates for military spaceflight are half of what you show in the figures you just presented minutes ago. Can you explain the discrepancy?

Wu: Those figures are being taken out of context!

Wu: I don't care much for your tone, Madame Administrator...

Liang: Now, now...we all understand that you are an enthusiast for the notion of a so-called Seeding project on behalf of PAC, but surely you see that -

Sochua: I don't care much for so-called scientists who dress up Lysenkoism and call it research. Or the paranoid that want to hide behind a banner of order and protectionism.

Liang: You still can't address the problem of social cohesion, though, can you? Can you really argue that an extrasolar settlement will retain stability in the face of the pressures of life on another world?

Sochua: No, stability would be impossible, but -

Liang: Ha! There you go then.

Sochua: But stability would be a death sentence. Colonists would be galvanized by the immediate needs and tasks of survival on the planet, which would obviate the need for a military presence. Prioritizing social stability in the face of crisis is a maladaptive strategy. During the events of the previous century, the PAC was not stable -

Liang: This is seditious -

Sochua: Where Wu twists figures to his own ends, Liang, you are wringing your hands in fear of something that might happen. The PAC adapted socially because the times demanded it. The PAC itself is a political entity because it was necessary to for it exist in the wake of the Korean Crises and the South China Sea War. The old PRC could not remain stable in the face of these forces. Requiring a colony to maintain full social cohesion with the PAC would cripple them from responding to emergent situations. You're defining a failure as a breakdown in order. I'm telling you that if you demand conventional order, failure will consist of total human extinction.

Liang: I wouldn't expect an academic like yourself to grasp the nuances of -

Sochua: There are no nuances to grasp. The situation is clear: Humanity has to leave the planet, and it has to do it before the Inflection Point becomes a reality. You and Wu and the rest of your kind are looking at this future and it terrifies you. You are paralyzed with fear - fear of what this means for the PAC and your place within it. So you comfort yourself with denial.

You deny the evidence of more difficult resource extraction. You deny the potential expansion of humanity because you cannot guarantee your secure, comfortable position.

You do it in the name of the social good. "Oh, the costs are so great; oh, switching the central manufacturing region from electronics to aerospace would affect our GDP growth targets; oh, perhaps a token demonstration settlement on Mars for a year or two." Really, though, what will the point of our proud military be when there is no one on Earth left to fight?

Others are moving offworld and pushing the frontiers of science and progress, and you are content to be on top of what you see, failing to realize that every moment we are not part of the Seeding, we are moving towards our own extinction. A safe, socially stable extinction where you are on top.

Liang: This is slander!

Sochua: The people who will build these colonies on the new worlds, they are the future of the human race. The PAC has a choice to participate in the future. The emperors of China who banned their subjects from leaving the borders of the kingdom, they are dust in their lost tombs and we don't even bother learning their names. I will not allow you to damn humanity to dust. [At this point, she gets up and leaves the panel session.]

AUTHOR’S NOTE: It was soon after this conference that Daoming Sochua volunteered to head one of the missions to colonize other planets for the Pan-Asia Cooperative. Sochua’s singleminded-ness drove her to outfit and launch “her” colony. 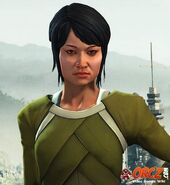