Introduced in Beyond the Sword

Wikipedia has a page called:
Darius I

Darius leads the Persians in Civilization IV: Beyond the Sword.

Darius the Great, as he became known, was recognized as a great organizer, builder, and financier. Ruling Persia during the first century, Darius both consolidated control of his kingdom and substantially expanded its borders, creating one of the largest empires in history.

During the early years of his reign, Darius focused on quelling the various rebellions that had sprung up in the wake of his predecessor's fall. After retaking Persia, Media, Babylonia and sections of Western Asia back from the rebels, Darius focused on creating an efficient and effective bureaucracy within his empire.

Darius devised a system in which each region would be the responsibility of a Satrap who would rule the region in his name. To prevent any individual Satrap from gaining too much power and challenging Darius' rule, the king implemented a series of checks and balances that effectively kept power from accumulating with any one man (besides Darius himself). Each region not only had a Satrap who was in charge of civil affairs, but a general who controlled the military, and the subtle presence of Darius' own secret police, who watched over them all. This system of government was so successful, it later became the inspiration for the governments of Alexander the Great and the Parthians.

Darius I conducted two historically important military campaigns against the Greek mainland. During the first, around 500 BC, he invaded Greece in retaliation for their support of the rebelling Ionian cities within Persian territory. Unfortunately, his ships were caught in a storm off the Athenian coast and were wrecked. In the second campaign Darius I managed to successfully land on the Athenian coast, but was defeated in the now famous battle of Marathon in 490 BC.

Despite his failures on the Greek mainland, Darius I conquered much land in Europe, North Africa and India. His military campaigning and sophisticated organizational designs ensured Darius' place as one of the greatest leaders of the ancient world. 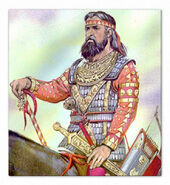 Darius on stone
Community content is available under CC-BY-SA unless otherwise noted.
Advertisement