The De Zeven Provinciën is a unique naval ranged unit of the Dutch civilization in Civilization VI: Rise and Fall. It replaces the Frigate.

In the Gathering Storm expansion, the De Zeven Provinciën requires 10

Naval ranged units are naturally excellent at besieging, thanks to their mobility,

Promotion tree, and the fact that they don't receive the 17

Districts (they still receive a 50% penalty against Walls, though). The Frigate, thanks to their

Range of 2, is the first naval ranged unit that can be meaningfully used in combat, and the De Zeven Provinciën is quite an excellent replacement for it.

Districts, the De Zeven Provinciën has a massive 12 extra

Ranged Strength over the Frigate, coupled with Bombardment and Rolling Barrage, allowing them to quickly shred through Ancient and Medieval Walls, even Renaissance Walls. If the map generation is favorable and if the Netherlands can reach Square Rigging in a reasonable time, this unit can be a monster on the sea. If the Dutch are lucky enough to attract Gaius Duilius or Santa Cruz and form a Fleet or Armada of De Zeven Provinciën, their enemies will need a powerful navy to protect their coastal cities. With a few exceptions, De Zeven Provinciën fleets or armadas can bring absolute destruction to any coastal city they can reach, as they can crack open the city defenses in just a turn or two.

However, the De Zeven Provinciën has the same issues as the Byzantine Dromon or the Brazilian Minas Geraes. These 3 naval ranged units are undeniably powerful but not very well supported by other abilities of the civilization. Of course, among these 3 civilizations, the Netherlands fares the best on a naval map, but since the De Zeven Provinciën is not unlocked earlier than its counterpart, in order to have a good timing push, you need to unlock it quickly, which demands sources of

Science that can only be supplied by inland river cities. Not to mention, in order to build De Zeven Provinciën, you need

Niter, which is unlocked with Military Engineering, a technology on the opposite side of the tech tree, placing an even heavier emphasis on

Science, if the Dutch wants to use their unit effectively.

Production, then seek out a spot with both coastal access and river to put down a city. This city will be your main hub of producing ships, with its Harbor and an Industrial Zone complex. Go for Military Engineering first to reveal

Niter, then beeline Square Rigging later, so that you can accumulate

Niter in the meantime. Due to the obvious offensive nature of this unit, you either aim to conquer with it, or don't care too much about it. On defense, it is nothing more than a slightly stronger Frigate with lower

Compare to the Jong, the other Frigate replacement, it looks like the De Zeven Provinciën is the better offensive unit thanks to its unique ability, but it cannot be any further from the truth. To put things in perspectives, the Jong is vastly superior, thanks to the military landscape and how every other pieces in the Indonesian arsenal gel together to support their unique unit, from the potential extra

Culture from religion to unlock it even faster, to the ability to raise a huge army of Jong within just one turn after it becomes available, to the extra

Combat Strength and mobility during the conquest. As for the De Zeven Provinciën, there are a lot of moving pieces you have to play around with for the unit to truly shine. Also, the Netherlands works best on maps where there is enough land and river systems for them to build a massive

District complex connecting multiple cities to fully make use of their civilization ability, and the De Zeven Provinciën, or any naval unit, does not work best on those maps.

For a fledgling nation bordering a small patch of the North Sea, the Dutch fleet of the late 17th Century was rather exceptional. Its powerful ships of the line were nearly half the length of a football field (either variety), armed with a minimum of 80 guns spread across two gun decks.

A typical Dutch ship of this class was the flagship De Zeven Provinciën (“The Seven Provinces”), the naval backbone of multiple battles in the Anglo-Dutch wars—battles nobody expected a mercantile nation to win. Nevertheless, these ships proved the Dutch could hold their own against other (presumably) mightier naval powers. 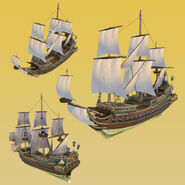 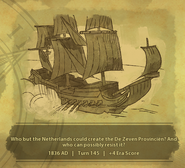