• Units are fully healed after healing next to the lake for 1 turn.


"Like to the apples on the Dead Sea's shore, all ashes to the taste."
– Lord Byron

The Dead Sea is a two-tile passable Natural Wonder in Civilization VI. The Dead Sea appears as a Lake on Desert or Grassland tiles. Each Wonder tile provides 2

Faith. Each Wonder tile also increases the Appeal of adjacent tiles by +2.

Unlike normal Lake tiles, the Dead Sea does not provide Fresh water to adjacent tiles. Land Units also suffer a

Movement penalty when they embark/disembark from the Sea's tiles onto dry land.

In Civilization VI: Rise and Fall, discovering the Dead Sea grants +1 Era Score, or +3 Score if the player is the first to do so.

In the Gathering Storm expansion, the Dead Sea is treated as a Coast tile. It only provides 1 extra

Housing from settling nearby, its yields can be changed by the Mausoleum at Halicarnassus, and every wonder and improvement that has to be built on the coastline can be built next to the Dead Sea, provided that all other conditions are satisfied.

Each Dead Sea tile has a yield of 2

Faith. Since Culture and Faith are often hard to generate early in the game, incorporating natural wonder tiles can provide a vital head start through the Civics tree, and can help a player found a Pantheon early on.

Like ordinary lake/coast tiles, the yields of the Dead Sea's tiles can be increased using certain bonuses. If the wonder tiles are owned by a city with a Lighthouse and Seaport, the yield of the tiles will increase by 1

Production. The Suzerain bonus of the Auckland city-state also increases the tile yields by 1

Production, and a further 1

Culture will apply to any district built next to the Dead Sea.

Unfortunately, as with all natural wonders, the Dead Sea tiles cannot be developed or improved. Because of this, natural wonders may be more of a hindrance than an asset later in the game - a natural wonder in the heart of a City can spoil adjacency bonuses for Farms and districts. In general, passable wonder tiles are significantly better than an unimproved tile of any kind, but are often less productive than an ordinary tile with an improvement or a district.

The Dead Sea – known to the Hebrews of antiquity as the “Sea of Salt” and the Arabs as the “Sea of Death,” both appropriate – is a salt lake in the Levant, and the lowest land elevation (420 meters below sea level) on Earth. With a salinity of 34.2 percent, it is one of the saltiest bodies of water on the planet ... hardly a garden spot. But it was one of history’s first health resorts, much favored by Herod the Great, and was thought to offer putative therapies for the likes of psoriasis, rhinosinusitis, cystic fibrosis, and osteoarthritis. Mining the shore region has supplied all sorts of trade opportunities, from asphalt for mummification to potash for fertilizer. Mankind has a knack for finding the silver lining in anything ... even the Dead Sea.

The Dead Sea, as seen in-game 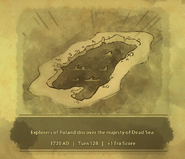 A civilization discovers the Dead Sea
Community content is available under CC-BY-SA unless otherwise noted.
Advertisement