Melee unit of the Modern Era

Combat Strength when fighting on Neutral or Foreign Territory.

The Digger is a unique melee unit of the Australian civilization in Civilization VI. It replaces the Infantry.

The Digger is a great replacement for the Infantry, with bonuses that allow the Australians to take a more active role in global conflicts in the Modern Era and beyond. With +15

Combat Strength on a coastal tile outside its home territory, the Digger can reinforce Australia's naval forces as they attack enemy cities located along or near the coast, or even spearhead assaults on its own. It also provides the Australians with a strong defense against enemies who try to launch land-based assaults against their cities, which will often be located on coastal tiles to take advantage of the

When facing Diggers, the best option is to outrange them or intercept them on the ocean. Diggers are tough on offense, but can easily fall prey to well-placed Machine Guns or fighter strikes. Just remember to keep them away from your AT Crews!

Unlike Civilization V, in Civilization VI, the site of the battle is actually the tile of the defender, not the attacker. Therefore, similar to other bonuses that grant extra

Combat Strength when "fighting on" certain terrain, the Digger will receive extra

Combat Strength when it attacks a unit standing on a coastal tile or on a tile outside of Australian territory, regardless of where the Digger stands. Also, the Digger will receive extra

Combat Strength on defense if it gets attacked while standing on a coastal tile or outside home territory.

At the onset of World War I, the British Army's need for soldiers led to the creation of the Australian Imperial Force. For bureaucratic ease, these troops were combined into a corps alongside soldiers from New Zealand. The newly formed corps underwent a baptism of enemy fire at the Battle of Gallipoli, which began with the (then) largest amphibious landing in the modern era. Called "Diggers" for their rapid entrenchment—or by their British comrades who thought all Australians worked in mines—they distinguished themselves until the war's armistice, gaining a courageous and genial reputation despite many hardships. Dissolved after the war's end, the Diggers have been re-formed when Australian and New Zealand troops fight together in larger-scale conflicts (such as World War II and Vietnam). 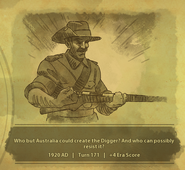